COVID-19 UPDATE: CLICK HERE for a special message from ArtsBoston.

Please note, this event has expired. 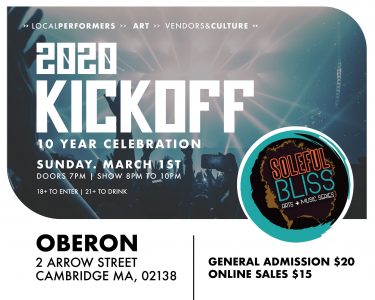 HOST
Treva Holmes is a recording artist, song writer, producer. and event hostfrom Boston, he’s opened for Dave East, PNB rock, Rick Ross just to name a few. he is a 2 time Boston Music Awards R&b artist of the year Nominee. he makes his own beats writes his

HOST
Treva Holmes is a recording artist, song writer, producer. and event hostfrom Boston, he’s opened for Dave East, PNB rock, Rick Ross just to name a few. he is a 2 time Boston Music Awards R&b artist of the year Nominee. he makes his own beats writes his own songs and engineers. he doesn’t care about the accolades, all he wants to do is spread positive energy and bring people together with music.he loves having fun and he brings high energy in his performance. In 2018 he released a project called NIGHTS IN ROXBURY and he dropped his newest project

MUSIC CURATOR
DJ Midwid page aka DJ Make it Do What It Do, from Miami, FL, a native that shares his love of music by blending some of latest and greatest R&B, Neo Soul and Hip Hop music to set vibes right and get the crowd feeling both mellow and hype on any given night. DJ Make it Do What It Do is currently working on a podcast to bring his ear for music to the masses. A technological and advance and follow up his 1 st compilation album, simply titled “Spoken Word Lyricists Volume 1” which featured various poets fromnacross the nation some recognized as Russell Simon’s Def Poets and Tony award winners such as Will Da Real One, Georgia Me, and Triple Blakk and featured music by Hip Hop and Soul music artist. Expanded his horizons to bring various forms of music to the forefront, DJ MIDWID developed Jazzy Fellow Productions. Through this company brings his love of Jazz music to the Literary Cafe & Poetry Lounge with a monthly jazz event called Jazzy Friday’s. DJ MIDWID is the one of founders of Miami’s first spoken word rooftop series called “The Ledge” held at The Viceroy Hotel. As he quickly gains recognition amongst some of the taste makers of Soul & Hip Hop Music there is no telling where you’ll see DJ Make It Do What It Do in the near future.

Amanda Shea is a multidisciplinary artist who resides in Boston. She has performed spoken word poetry at numerous venues throughout Boston, including the Isabella Stewart Gardner Museum, Museum of Fine Arts and the Institute of Contemporary Art in the Summer of 2019. She served as an official host for the 2018 Boston Art & Music Soul Festival and most recently the Arts Equity Summit. She has been featured on podcasts and broadcasts such as ItsLitBoston, Boston Come Through, and Fahrenheit TV. She serves as a radio host on Live Free or Die Radio. In April 2019, Shea performed at UMASS Boston with The Poets’ Theatre and independently for Phillis Wheatley Day. Shea performed at the Alvin Ailey Theatre with beheard.world with original pieces regarding racism and identity. In May, Shea will appear in the cast of The Poets’ Theatre’s seventh revival of Boston Abolitionists, a program developed in partnership with the Boston Athenaeum. Shea will return to the Boston Athenaeum as a curator for a performance titled, “Other Voices in the Room” which speaks to identity politics and cultural appropriation. Shea is passionate about humanity and the arts. She enjoys staying busy being a mother, an artist, and a polymath.

Tangela Mathis, a singer, songwriter, producer, model, visual artist and muse, TANGELA cannot be contained. She knows this from experience. TANGELA has dibbled and dabbled in the arts since she was a toddler-weaving in and out of bands, theatrical outfits and dance troupes, intent on finding her truest self. Memphis music legends have baptized and verified TANGELA at a young age as she studied under the tutelage of soul music icons at the city’s STAX Academy of Music. The spirit of Memphis -the tension, hustle, grind, grit and flair are evident in the Berklee College of Music graduates music. Self-described as “purposely meandering, bass-heavy, energetic, sweet, spicy, and unapologetically country.” TANGELA’s suite of extended plays titled “FWD” seeps soul from it’s pores.

MirandaRae, born in the city of Cambridge, Mass and raised in South Florida. Miranda Rae stuck to the likings of the strong female vocalist she grew up around though. A self taught R&B vocalist, with influences of Sade, Jill Scott, Adele, India.Arie , Erykah Badu and many more, she found a sound of her own. Performing at small venues around the Southern Florida area she gained a name for her self, with a small but growing fan base. After a roller coaster of what she believed was love, Miranda Rae was inspired to debut her first EP entitled “Defying Love” in 2016. In recent years, Miranda Rae has moved back to the Boston area with hopes to make a name for herself. With finding her way in to the local seen, she’s already got her foot in the right doors. Continuing with a path of original songs, she has released her second EP entitled “Excuse My Baggage” Streaming on all major platforms.

Najee Janey’s love for music was birthed during his adolescence while watching his father play a diverse range of music like: Zouk, Jazz, Funk, and LatinX. The singer, songwriter, rapper, and poet from Roxbury, MA is just beginning to find himself musically and is pushing his craft to new heights.

After first hearing Big Pun’s “Still Not a Player”, Najee fell in love with the honesty, complexities, and culture of Hip-Hop. While Hip-Hop is his first love, his sound can’t be boxed in. This is evident with his recent soultry release What’s Crackin and his numerous songwriting credits on Atlantic Records R&B artist Sebastian Mikael’s last two albums, including his recent hit single “Time.”

Najee is poised to have a successful career as a songwriter and performer. Coming off 2 nominations at The Boston Music Awards (“Unsigned Artist of the Year & R&B Artist of the Year”), Najee has just released “The Purple Earth Theory,” his first project in 4 years. Najee’s debut album is slated to be available mid-2020.