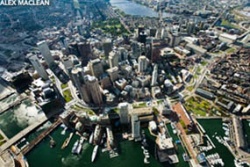 The Rose Kennedy Greenway, a vibrant, mile-long ribbon of open space, was created when Boston’s elevated six lane highway was demolished and the Central Artery Project completed. Now, four of Boston’s most diverse and dynamic neighborhoods – formerly divided by a massive structure of steel and asphalt – are linked by beautifully landscaped parks, gardens, and plazas and reconnected with the harbor. Established in July, 2004 through an agreement with the Massachusetts Turnpike Authority, the City of Boston, and the Commonwealth of Massachusetts, the Rose Fitzgerald Kennedy Greenway Conservancy is a private, non-profit organization. The Conservancy operates, maintains, preserves and manages the parks on behalf of the public. As a private, non-profit organization, we raise private and public funds to support the parks, aspiring to excellence in design, operations and public programming.