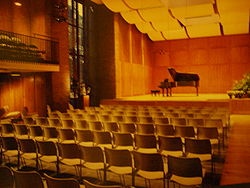 The Edward M. Pickman Concert Hall, originally built in 1970, is the Longy School of Music’s primary performance space. Named in honour of Edward M. Pickman, President of the Board of Trustees from 1955-1959, the 300-seat birch-lined hall provides a setting for masterclasses and both solo and chamber performances. The hall was designed by the Boston architectural firm, Huygens and Tappe (now Tappe Associates, Inc.).