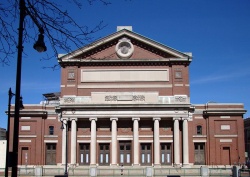 Symphony Hall opened on October 15, 1900. It was the first concert hall designed with acoustical principles in mind and is regarded as one of the two or three finest halls in the world. With the exception of the wooden floors, the Hall is built of brick, steel, and plaster, with only a moderate amount of decoration.

The first home of the Boston Symphony Orchestra was the Old Boston Music Hall which was threatened in 1893 by a city road-building/rapid transit project. That summer, the Orchestra’s founder, Major Henry Lee Higginson, organized a corporation to finance a new and permanent home for the orchestra. Symphony Hall opened on October 15, 1900, with an inaugural gala led by music director Wilhelm Gericke. The architects, McKim, Mead & White of New York, engaged Wallace Clement Sabine, a young assistant professor of physics at Harvard, as their acoustical consultant, and Symphony Hall became the first auditorium designed in accordance with scientifically derived acoustical principles.

Widely regarded as one of the two or three finest concert halls in the world, the walls of the stage slope inward to help focus the sound. The side balconies are shallow so as not to trap any of the sound, and the recesses of the coffered ceiling, along with the statue-filled niches along the three sides, help to distribute the sound throughout the hall. The 16 replicas of Greek and Roman statues are related in some way to music, art, or literature. They were placed in the niches as part of an appreciation of the frequently quoted words, “Boston, the Athens of America,” written by Bostonian William Tudor in the early 19th century. The Symphony Hall organ, an Aeolian Skinner designed by G. Donald Harrison and installed in 1949, is considered one of the finest concert hall organs in the world.

A couple of interesting points for observant concert-goers: Beethoven is the only composer whose name was inscribed on one of the plaques that trim the stage and balconies; the other plaques were left empty since it was felt that only Beethoven’s popularity would remain unchanged. The initials “BMH” for “Boston Music Hall”, as the building was originally to have been called, appear on the stairwell banisters at the Huntington Avenue side, originally planned as the main entrance. The old Boston Music Hall was gutted only after the new building, Symphony Hall, was opened.