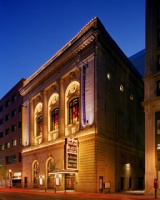 Built in 1903 as the second performance venue in Boston’s historic Theatre District, the elegant architecture and impeccable acoustics of the Majestic were originally intended for opera performances. Over the years, the facility was also used for theatre, vaudeville and even movies. When Emerson College purchased the property in 1983, the building had severely deteriorated. After a magnificent restoration, made possible by Ted and Joan Benard-Cutler, the Cutler Majestic Theatre reopened in 2003 and now serves the Boston community by showcasing first-class performing arts groups in its exquisite 1,186-seat auditorium. Recognized as a Boston Historic Landmark, the Cutler Majestic combines state-of-the-art theatre facilities with old world charm.