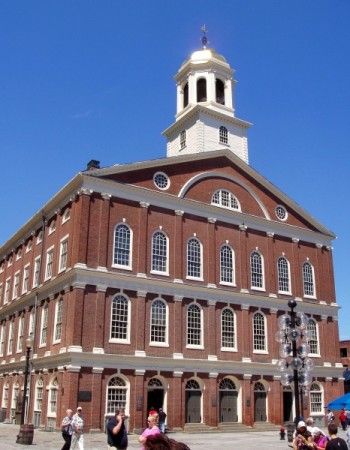 Officially listed on the National Register of Historic Places in 1966, this historic market building, first built in 1742, sits at the site of the old town dock. Town meetings, held here between 1764 and 1774, heard Samuel Adams and others lead cries of protest against the imposition of taxes on the colonies by the British. Faneuil Hall was expanded in 1806 by Charles Bulfinch and Frederick Douglass, William Lloyd Garrison, and Lucy Stone brought their struggles for freedom here in the 19th century. When Boston became a city, the use of Faneuil Hall as a government meeting place came to an end, but it was still regularly used.

Today, market stalls on the first floor service shoppers much as they did in Paul Revere's day and the second floor is a meeting hall where many Boston City debates are held. The fourth floor is maintained by the Ancient and Honorable Artillery Company.

National Park Service rangers present historical talks every thirty minutes, 9:30 am – 4:30 pm, except when Hall is in use for special events.