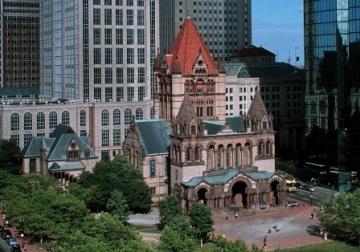 Copley Square is a public square located in the Back Bay neighborhood of Boston, Massachusetts, named for the donor of the land on which it was developed. The square is named for John Singleton Copley, a famous portrait painter of the late 18th century and native of Boston. A bronze statue of Copley, by sculptor Lewis Cohen, is located on the northern side of the square. The name Copley Square is frequently applied to the larger area extending approximately two blocks east and west along Boylston Street, Huntington Avenue, and St. James Avenue. The square is adjacent to the finish line of the Boston Marathon, which is commemorated by a monument in the park.