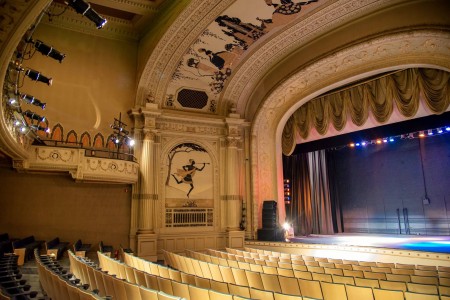 The Cabot Theatre in downtown Beverly, Massachusetts is a North Shore treasure, a legacy of the visionary showmanship of the Ware Brothers. Opened in 1920 as a dream palace of vaudeville and silent movies, it was once hailed as “the most impressive auditorium of its size east of New York.” This Ware Theater shared a distinguished architectural pedigree, designed by the architects of Boston’s Athenaeum and Olympia Theater and Dorchester’s Strand Theater. For its first 40 years, it served as a center of community life for downtown Beverly.

The venue was purchased in 1960 by movie chain giant E.M. Loews, who renamed it the Cabot Cinema. A unique and remarkable transformation began in 1976 when it was purchased by Le Grand David and his own Spectacular Magic Company. For 37 years, The Cabot hosted a long-running magic show that entertained local audiences, made seven White House appearances and won recognition in the Guinness Book of Records and the magazines of TIME, Smithsonian and National Geographic World.

No ordinary building, The Cabot is a rare survivor. Only 250 similar movie palaces still exist out of an estimated 20,000 theaters built in the 1920s. But its future came into doubt when the Magic Company wound down and they placed the theater up for sale.

The Cabot was revived in 2015 when a group of investors bought the jazz-age theatre.  Now, the newly formed Cabot Performing Arts Center is a 501 (c) (3) nonprofit organization whose mission is to enrich the cultural life of the north shore community with a full and diverse calendar of quality live music, film and other performing arts. The theatre has been undergoing extensive renovations and will install additional new seating and much more in early 2017.

Experiencing a concert at the Cabot is both a visual and acoustical delight. A listening room, the 96-year-old movie palace now offers warm and nuanced sound throughout the house, even in the highest seats in the balcony. The non-LED digital lighting systems and unobstructed sight lines provide an intimate and memorable concert experience, for both artists and audiences.