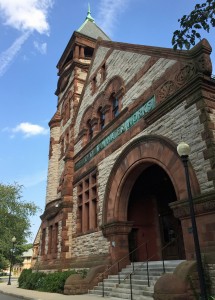 Dubbed “The Cathedral of Steam Technology,” the facility served originally as the high service pumping station that delivered clean, safe drinking water into the heart of 19th century Boston. Built in response to the Great Fire of 1872, the Waterworks was the nexus of a complex supply and delivery system that included reservoirs, aqueducts, water towers, and other facilities that eventually became part of the Metropolitan Water Resources Authority.

Today, the museum preserves the three original, coal-fired, steam engines that pumped millions of gallons of water each day into Boston. The historic building, designed in the Romanesque style of H.H. Richardson, was built by Boston City Architects Arthur H. Vinal in 1888, and enlarged by Edmund March Wheelwright in 1897. The structure was constructed near the Chestnut Hill Reservoir, part of the pastoral park and carriageway influenced by the Olmstead brothers’ landscape style. Turn of the century engineer and microbiologist George C. Whipple, later co-founder of the Harvard School of Public Health, and chemist Ellen Swallow Richards, the first woman admitted to the Massachusetts Institute of Technology and a pioneer of water quality testing, are among the notable contributors to the Waterworks legacy.

The museum serves as a community hub for audiences interested in the rich history of the Waterworks system. Thousands of visitors are welcomed each year for lectures, tours, and exhibits free of charge. Our education department partners with students and teachers for enhanced, curriculum-connected programming focused on water science, engineering, and sustainability. A dedicated group of volunteer docents, many retired engineers, historians, and scientists, guide visitors through the building and collections spaces.

The Waterworks building is ADA accessible and stroller friendly. The museum is served by the T via Green Line “C” (Cleveland Circle stop) and “D” (Reservoir stop) trains, and is reachable by Buses #51 and #86. Limited parking is available onsite. For more information on the history and program offerings, please visit the museum’s webpage at www.WaterworksMuseum.org, or follow us on Facebook (@WaterworksMuseum) and Twitter (@MetroWaterworks).