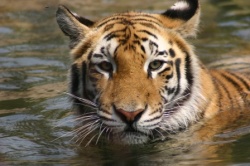 For more than 100 years, Stone Zoo has delighted generations of visitors. This 26-acre site is home to monkeys, Canada lynx, a snow leopard, Mexican gray wolves, river otters and many other fascinating animals from around the world. The Treasures of the Sierra Madre exhibit features jaguars, cougars, coyote, and Gila monsters. At Windows to the Wild, view hyacinth macaws, flamingos, two-toed sloth, meerkats and many other species. Don’t miss the black bear exhibit! This impressive exhibit opened in May 2008 and is home to two black bears. Animal Collection: Dino Dig – A replica of an actual active archaeological dig site in Canada where children can dig for faux fossils from the Paleozoic, Mesozoic, and Cenozoic eras. Mexican Grey Wolves – This habitat is home to the Mexican grey wolf, which is the rarest, southernmost and most genetically distinct sub-species of the grey wolf in North America. Monkey Exhibit – A home to visitor favorites such as the Coatimundis, Spider monkeys, and Colobus monkeys, who entertain excited zoo-goers throughout the summer months. Himalayan Highlands – The home to a beautiful pair of breeding snow leopards, Markhor goats, and the regional beast of burden, the yak. Touchable Barnyard – A wonderful exhibit that allows children and visitors a chance to get close and personal with a variety of friendly animals such as Hampshire sheep, miniature horses, and pygmy zebu. Treasures of the Sierra Madre – An exhibit that houses wildlife from the Southwestern United States and Mexico, including a breeding pair of jaguars and their baby, cougars, coyotes, Gila monsters, spectacled owls, cacomistle, and other indigenous reptiles and birds. Windows to the Wild – This exhibit is the home to a variety of small birds, mammals, and primates from around the world, including African-crested porcupines, hyacinth macaws, emperor tamarins, Malayan flying foxes, two breeding colonies of Caribbean and Chilean flamingos, and much more. Yukon Creek – A replica of the Canadian north woods, which houses members of their native wildlife such as bald eagles, Canadian lynx, and a pair of real reindeer.