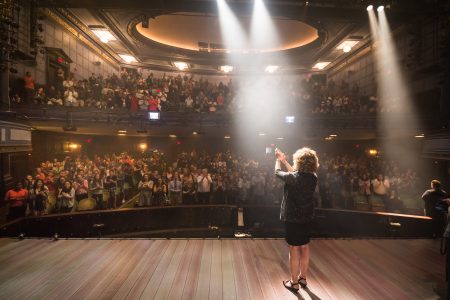 The Huntington Theatre Company engages, inspires, entertains and challenges audiences with theatrical productions that range from the classics to new works; we train and support the next generation of theatre artists; we provide arts education programs that promote life-long learning to a diverse community; and we celebrate the essential power of the theatre to illuminate our common humanity.

Recipient of the 2013 Regional Theatre Tony Award and Boston magazine’s 2013 and 2014 Best of Boston award, the Huntington Theatre Company is Boston’s leading professional theatre company and one of the region’s premiere cultural assets. Under the direction of Artistic Director Peter DuBois and Managing Director Michael Maso, the Huntington cultivates, celebrates, and champions theatre as an art form, while also supporting the local theatre community through its operation of the Stanford Calderwood Pavilion at the Boston Center for the Arts, which the Huntington built in 2004. The company was founded in 1982 by Boston University and separately incorporated as an independent non-profit in 1986. Its two prior artistic leaders were Peter Altman (1982 – 2000) and Nicholas Martin (2000 – 2008).