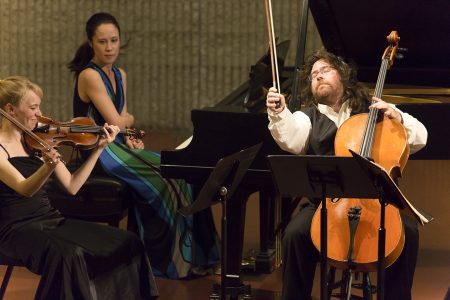 Founded in 1998, Chameleon has distinguished itself as one of the finest and most versatile chamber ensembles in Boston. Over the past 20 years, we have produced more than 200 concerts featuring a staggering array of 500 different works. We began with a modest five-concert series, and have more than tripled the number of annual performances, with 20 concerts planned for the 2018-2019 season, in three series: our Chamber Music Series, Chameleon Up Close recital series, and Education Series.

The programs feature our hallmark mix of standard, neglected and contemporary chamber music, tied together by unique thematic concepts (highlighted by poetic concert titles) that provide framework to make all the music understandable and relatable. We aim to show connections rather than differences and create diverse and balanced programs of music that are satisfying and enriching on every level. It is this artistic philosophy that has earned Chameleon its excellent reputation, unqualified praise from critics, and a loyal, growing core of concertgoers and supporters. The Boston Musical Intelligencer praised us for “keeping the element of adventure alive…not just as a sophisticated craft, but as a labor of love.”

The Ensemble has been recognized nationally with awards from the National Endowment for the Arts for its fall 2015 and 2017 programs, Koussevitzky Music Foundation awards in 2015 and 2004, and 2009 and 2007 Adventurous Programming Awards from the American Society of Composers, Authors and Publishers and Chamber Music America. Chameleon has served as artists-in-residence at Lee University and as ensemble-in-residence for Northeastern University’s Fusion Arts Exchange, a summer program for international students sponsored by the US State Department. The Ensemble has been featured on WGBH Radio, WHRB Classical, and WBUR Radio Boston.