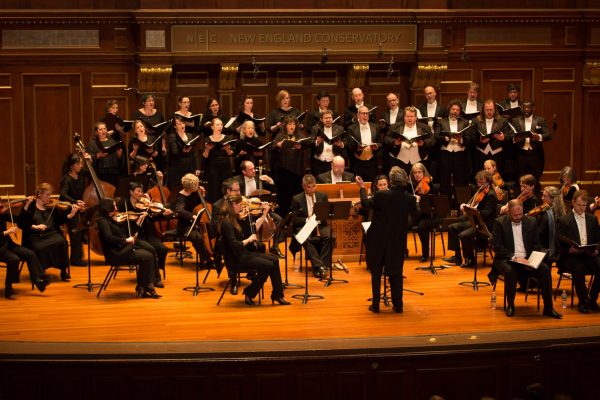 Three-time Grammy Nominee Boston Baroque “the first permanent Baroque orchestra established in North America” is now widely regarded as this country’s leading period-instrument orchestra and chorus. The ensemble’s performances and recordings of the Baroque and Classical repertoire have been acclaimed from Boston to London, from New York to Vienna to Sao Paulo for their freshness, virtuosity, and exuberant appeal.

Founded in 1973 by Martin Pearlman, Boston Baroque presents an annual subscription concert series in Greater Boston and reaches an international audience with its critically acclaimed recording series on Telarc. Boston Baroque made its European debut in April 2003. performing Handel’s Messiah to sold-out houses and standing ovations in Krakow and Warsaw. Poland. The ensemble celebrated its thirtieth anniversary in 2003-2004 with a tour of the Monteverdi Vespers to major American music centers, including the Tanglewood and Ravinia Festivals and its West Coast debut in Los Angeles’s Disney Hall. Boston Baroque’s many career milestones include the American premiere of Rameau’s Zoroastre; the American period-instrument premieres of Mozart’s Don Giovanni and The Magic Flute, and Beethoven’s Seventh Symphony and Violin Concerto; and the modern premiere of The Philosopher’s Stone, a singspiel newly discovered to include music by Mozart and to shed fresh light on his canon. From 2000-2003, Boston Baroque presented Boston’s first complete cycle of the surviving operas of Monteverdi.

Boston Baroque’s recordings are heard by millions on classical radio stations throughout this country. Fanfare magazine called its recording of Bach’s Brandenburg Concertos “A set to treasure…it belongs on the shelf of every lover of the Baroque.” The Bach Orchestral Suites were an Editor’s Choice at Gramophone, which cited their “virtuosity and elan.” The premier recording of The Philosopher’s Stone was an Opera News Editor’s Choice, and was called by Fanfare “a valuable and utterly fascinating release” in which “the standard of performance…rises frequently to the level of the spectacular.” Boston Baroque’s recording of Messiah was Classic CD’s number one recommendation in its 1997 review of the crowded field of Messiah recordings. Billboard magazine called Gluck’s Iphigenie en Tauride “a superb production [and] cause for celebration…takes pride of place among readings of Iphigenie en Tauride, if not among all Gluck operas on record.” The first period-instrument recording of Robert Levin’s completion of the Mozart Requiem was named one of the three most important classical CDs of 1995 by CD Review. Three Boston Baroque recordings have been Grammy finalists: Handel’s Messiah (1992); Monteverdi’s Vespers of 1610 (1998); and Bach’s Mass in B Minor (2000).