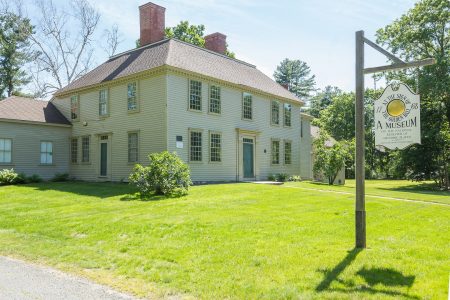 The Golden Ball Tavern Museum was originally a family home and tavern, built in 1768 on the Boston Post Road in Weston.  We are pleased to offer free Second Sunday Open Houses every month along with other special events throughout the year.  Learn more at our website www.gbtmuseum.org

The Golden Ball Tavern was established and operated by prominent Weston resident, Isaac Jones.  The tavern “at the sign of the Golden Ball” operated as an inn from 1770 to 1793 and played a pivotal role in the unfolding of the Revolutionary War when it served as a base for British spies. The house and Tavern were later occupied and carefully preserved for 200 years by six generations of the Jones family until it was acquired by the Golden Ball Tavern Trust in the 1960’s.

Here history still lives and breathes, telling the story of change through time. Come and explore this unique Revolutionary era tavern and learn of “the spies who went out in the cold”, the “other” tea party, and the eventful visit of Paul Revere’s men.

The Tavern is listed on the National Register of Historic Places and is entirely self-sustaining.