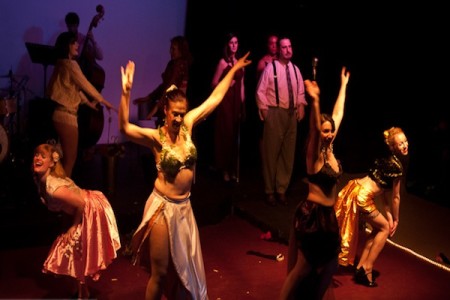 A 100 year-old burlesque show that closed after one performance? What could possibly go worng?

During the rainy summer of 1816, Mary Shelley and her lover (and future husband), Percy Bysshe Shelley, visited Lord Byron at the Villa Diodati by Lake Geneva in Switzerland. The weather was cold and dreary, so the group amused themselves by reading German ghost stories translated into French from the book Fantasmagoriana.
Byron proposed that they each write a ghost story, but he couldn't finish anything. His personal physician, John Polidori, took Byron's scraps and turned it into a novel: The Vampire. Finished in 1819, the work is regarded as the first romantic depiction of the undead. It was terrible, but it was a hit in France where the name was used for a play, Les Vampyres, that didn't really have anything with the novel. Not to be outdone, the Germans wrote two different operas based on the play. The plot of the two operas bore only a passing resemblance to the play, the novel....or each other.
In 1912, with World War I looming in the near-distance, burlesque impresario W. R. Athskellar was searching desperately for a property to turn into a theatrical hit. He came across a copy of the largely forgotten opera. Inspired, he spent over ten thousand pounds ($1.42 million in 2021 ) developing it into a burlesque show, "Vamps After Midnite!". It was a spectacle of special effects, a 70-piece orchestra, a flock of trained bats, and two black panthers...who turned out to be less well-trained.
The show closed after two rehearsals and one performance, sinking into well-deserved obscurity...until now! BeauTease Burlesque recently received a what may be the only extant copy of "Vamps After Midnite" from an unknown benefactor.
We are so excited to be bringing it to life in front of a modern audience, exactly as performed over 100 years ago (with some modifications for modern sensibilities, budgetary reasons, and several federal and state laws). With a treasured work like this one, what could possibly go worng?

General Admission $35.00 available online and at the door.