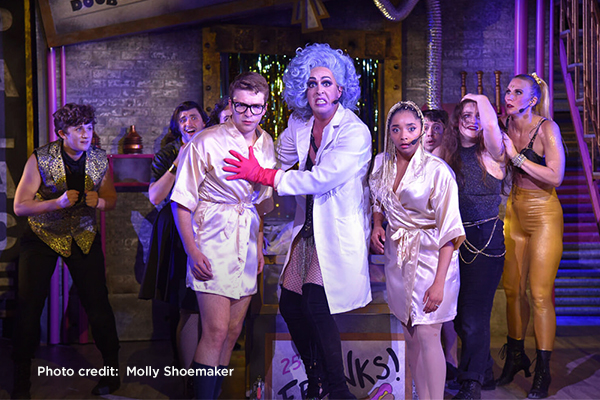 Presented by Moonbox Productions at The Lab

The Rocky Horror Show is BACK in Harvard Square this October. Join us for this pop-up presentation of this legendary cult classic! Performances are at “The Lab” @ 25 Brattle Street in Cambridge, MA. Photo credit: Molly Shoemaker.

Back by popular demand, Moonbox Productions will perform Richard O’Brien’s legendary cult classic, The Rocky Horror Show, at a pop-up theater in Harvard Square in the old storefront of Hidden Sweets. Directed by David Lucey, and Music Directed by Mindy Cimini, The Rocky Horror Show opens on October 16th will run through October 31st back at “The Lab” @ 25 Brattle Street in Cambridge, MA.

A humorous tribute to the science fiction and horror B movies of the late 1940s through to the early 1970s, The Rocky Horror Show tells the story of Brad Majors and his fiancée, Janet Weiss, who get caught in a thunderstorm with a flat-tire and are forced to seek help at the castle of Dr. Frank ’N’ Furter, a transvestite scientist with a manic genius and insatiable libido. Brad, Janet, and Frank’ N’ Furter’s cohorts are swept up into the scientist’s latest experiment, a Frankenstein-style monster in the form of an artificially made, fully grown, physically perfect muscle man named Rocky Horror, complete “with blond hair and a tan”. The night’s misadventures will cause Brad and Janet to question everything they’ve known about themselves, each other, love, and lust. With an irresistible rock ’n’ roll score, The Rocky Horror Show is a hilarious, wild ride, that no audience will soon forget.

Tickets are General Admission with Pay-What-You-Can* Seating available at the box office prior to each performance.

Tickets are General Admission with Pay-What-You-Can* Seating available at the box office prior to each performance.

Audio Description will be offered on the Friday 10/29 performance.

Any questions or requests for accommodation can be directed to Kara Crumrine at community@moonbox.org.

Moonbox is committed to integrating accessibility into each of our productions, starting on day 1. Access is not an add-on.