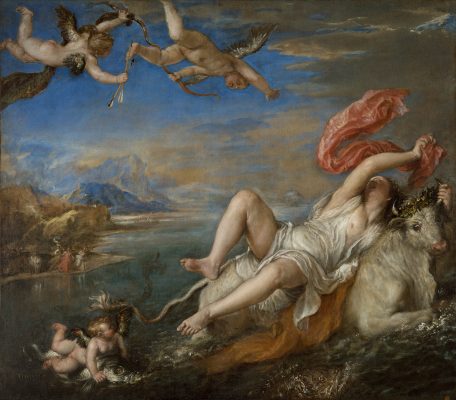 The Female Figure. The Male Gaze. A Contemporary Lens.

Between 1551 and 1562, Titian created a series of monumental paintings for King Philip II of Spain. Celebrated as landmarks of western painting, the six poesie — or painted poetries — envision epic stories from classical Antiquity. Titian reimagined these familiar tales and used his modern style of painting to shape the future of western art. For the first time in over four centuries, Isabella Stewart Gardner’s fully restored Rape of Europa is reunited with its five illustrious companions in the exhibition’s finale and its only American venue on an international tour including to the National Gallery, London, and the Museo del Prado, Madrid. This exhibition explores each painting's story, its drama, raw emotion, and complex consequences illustrated in each painting, reconsidering what the poesie meant in their own time and how they resonate now. Newly commissioned responses by contemporary artists and scholars engage with questions of gender, power, and sexual violence as relevant today as they were in the Renaissance.

Two new works developed in response to Titian’s paintings are on view in both the Museum's Fenway Gallery and on the Museum’s Facade. In the Fenway Gallery, Artists-in-Residence Mary Reid Kelly and Patrick Kelley give voice to the central figure of the Gardner’s Titian painting: Europa. On the facade, Barbara Kruger’s Body Language uses a detail from Titian’s Diana and Actaeon to challenge the dynamics of gender and power.