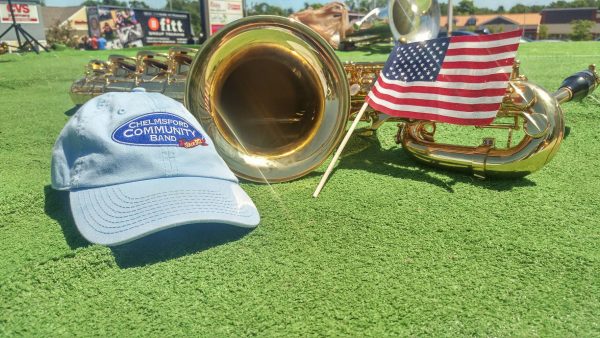 After 15 months in lockdown, the Chelmsford Community Concert Band will be resuming its local performances with its traditional July 3 concert on Chelmsford Town Common at 7pm.  Over a year ago, the band had met for the dress rehearsal of its first concert under newly hired director Eric Linsner mere days before the pandemic closed down the region. But with vaccination coverage rising, and the ability to perform outdoors during the warm season, this will finally change. The program promises to be full of the band’s favorite Independence Day and Summertime pieces as they celebrate the joy of making music again. Please come with your chairs and your picnic blankets, bring the entire family with you, and enjoy the sounds of live music performed outdoors as the sun sets on the Common.  This concert’s generous sponsors are Market Basket and Trinity EMS.  The band will also be performing at 7pm on Tuesday, July 20, and Tuesday, August 10.

Looking forward, the band is excited to celebrate the 50th anniversary of their founding next year in 2022, a milestone celebration made more poignant by the long separation.  A highlight of the anniversary festivities will be the performance of a unique commissioned piece that showcases the band’s enduring style and spirit, and this will be the focus of the next year’s fundraising.

The Chelmsford Community Band was founded in 1972 and is a volunteer group of adult musicians who greatly enjoy bringing live music to the greater Chelmsford area.  The concert band and jazz ensemble both perform several concerts throughout the year and on Chelmsford Common every summer. Look for them online at www.chelmsfordcommunityband.com, or follow them on Facebook, Twitter, or Instagram.