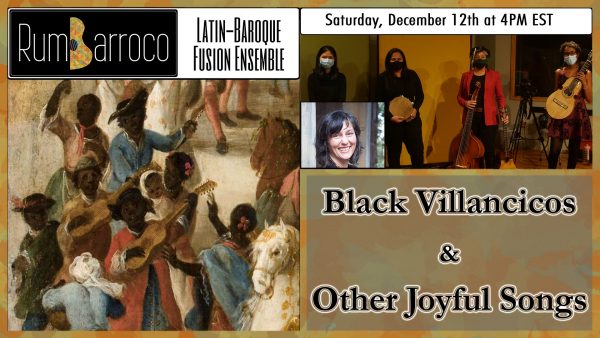 Black Villancicos and Other Joyful Songs

Rumbarroco is proud to present a lecture/concert that delves into Africa’s lasting musical legacy in Ibero-American music.

Black Villancicos and Other Joyful Songs

Rumbarroco continues its mission of unearthing and revitalizing early music treasures with a special event blending music and history into a celebration of Ibero-American and Afro-Latin music. The virtual concert will be streamed live on Saturday, December 12 at 4PM.

Following up on their groundbreaking performances, Rumbarroco will broadcast the American premiere of Olá Plimo Bacião’s  from the villancicos of the Liturgy of Santa Cruz De Coimbra as well as their interpretation of de Cumbee and Zarambeque dances. The concert will also include music from early Baroque Portuguese composer, Gaspar Fernandes, the Venezuelan Aguinaldo Margariteño, and Afro-Baroque instrumental music by Spanish composer Santiago de Murcia, among others.

Between all the music, literary scholar, musicologist, and musician Octavio Páez Granados will discuss the fascinating evolution of the villancico: its beginning as devotional folk song, its golden age as the Ibero-American equivalent of opera, and its contemporary role as festive holiday music. Prof. Granados will also discuss how the Black villancicos tie into Afro-descendant society and their impact today. Spoken remarks will be both in English and Spanish.

Rumbarroco presents the perfect opportunity to enjoy holiday music and learn something new while honoring a rich cultural heritage.

This concert is supported by the George Henschel Community Award from the Harvard Music Association.

Payment for tickets is optional.

Payment for tickets is optional