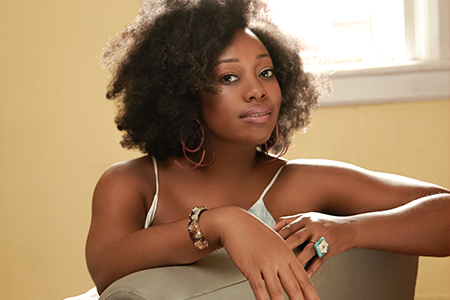 Born in Brooklyn, Alicia Olatuja’s artistic coming out party occurred when she was featured at President Obama’s 2013 inauguration, taking a solo during the Brooklyn Tabernacle Choir’s rendition of “The Battle Hymn of the Republic” and leaving the music world buzzing about the show-stopping singer. Before that, Olatuja had already developed a reputation as a classically-trained rising star mezzo-soprano emerging out of the Manhattan School of Music.  She made her recital debut at Carnegie Hall and her professional debut as Sacagawea in the World Premiere operetta Corps of Discovery at the Opera Memphis, delving into musical theater and opera.  Never one to remain musically static, Olatuja turned to her other passion, jazz and world music, teaming up with her husband, bassist Michael Olatuja (a renowned Nigerian-British artist), for the Olatuja Project.  In 2011 the Olatuja Project released a record called The Promise, an album that combined jazz, soul and traditional Yoruba music. In October of 2014, following the attention and praise from her solo at the inauguration, Alicia released her debut solo record Timeless, a remarkable jazz/soul/world music effort that featured a host of guest stars including bassist Christian McBride. The response from the press and public was rapturous, setting the stage for Olatuja’s inevitable commercial breakthrough.