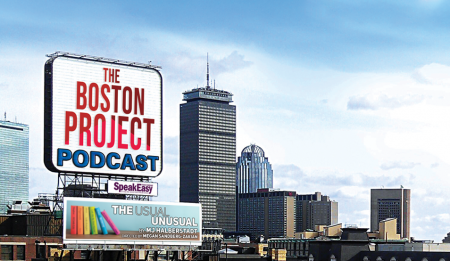 The Usual Unusual is a scrappy and quaint bookstore where Boston’s LGBTQ+ community has gathered to shop, organize, and flirt since the 70’s. When the store’s charismatic founder Penn announces his retirement, neurotic staff-member Charlie persuades him to pass leadership on, rather than close the store. The staff’s efforts to unite a fractured community under one banner – or simply coordinate a weekly reading night — stoke generational disputes about identity, community, and trauma, and lead to fraught and hilarious results.

The Boston Project is SpeakEasy’s new works initiative, which supports the creation of new plays set in the Greater Boston area. In an effort to reach a wider audience and engage with new work even while in quarantine, SpeakEasy has launched a new wing of this program – the Boston Project Podcast!

We are excited to bring you the first series of the podcast – a fully adapted, episodic version of the play The Usual Unusual by MJ Halberstadt, performed and recorded by local artists.