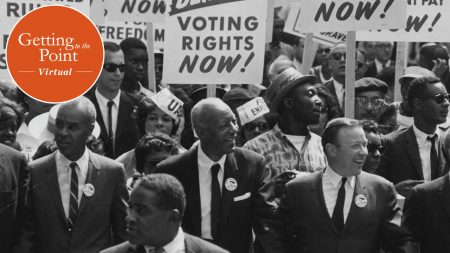 Getting to the Point on Voting Rights

Join the Kennedy Institute for a conversation on voting rights and hear from grassroots organizations, former Congressional staff who helped ensure passage of the Voting Rights Act, and learn how voting rights are threatened today.

Join the Kennedy Institute for a conversation on voting rights and hear from grassroots organizations that garnered national support for the Voting Rights Act, former Congressional staff who helped ensure passage of the landmark legislation, and how the United States is currently facing similar crises around disenfranchisement.

The Voting Rights Act, originally passed in 1965, has undergone multiple revisions in Congress. Senator Edward M. Kennedy was a staunch supporter of the legislation and had advocated for the elimination of the poll tax prior to its passage. Throughout his time in the United States Senate, Senator Kennedy worked with members of Congress, staff, and grassroots organizations to ensure that all voices were heard. Despite this work and law, many voters across the country are still disenfranchised.

Moderated by Ari Berman, senior reporter at Mother Jones and author of “Give Us the Ballot”, the conversation will include: