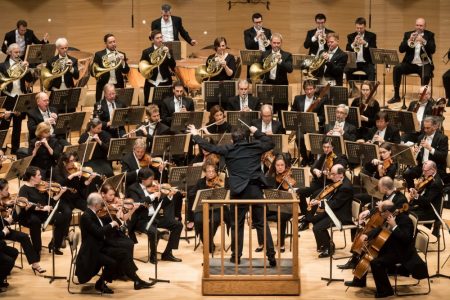 Over the next six weeks, you’ll have a chance to hear some great performances by the Boston Symphony Orchestra, drawn from the amazing archive of recordings of concerts given in Symphony Hall and at the orchestra’s summer home, Tanglewood.

For this first week’s offering, I’ve chosen works conducted by seven of the BSO’s 15 Music Directors, and repertoire with which each is particularly associated. The oldest recording is a performance of Beethoven’s 9th symphony, conducted by Serge Koussevitzky (the BSO’s Music Director, 1925-49) at Tanglewood in 1938 – the first time the work was played at the festival – and the most recent is a thrilling performance of the Sibelius 2nd, led by our current Music Director, Andris Nelsons, in his inaugural season.

Included also in this week’s series of downloads is a performance of Stravinsky’s Symphony of Psalms, one of the many works commissioned and premiered by the BSO, and one of the seminal pieces of the early 20th century. Seiji Ozawa, who served as BSO Music Director from 1974 until 2002 – the longest tenure of any conductor – excelled particularly in music of this period. And he’s joined by the Tanglewood Festival Chorus, which next month celebrates the 50th anniversary of its first concert.

In other offerings, you’ll have a chance to hear great performances of French repertoire by Charles Munch, more Beethoven with William Steinberg, and a rousing version of the suite from Strauss’ Der Rosenkavalier given by Pierre Monteux. Finally, the great American mezzo-soprano Marilyn Horne joins Erich Leinsdorf in a 1967 performance from Tanglewood of excerpts from Wagner’s Götterdämmerung.