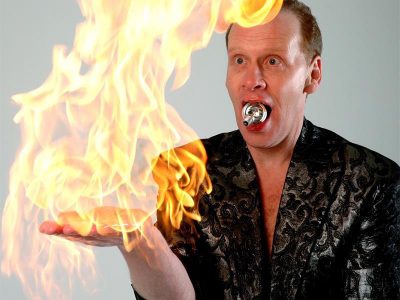 Stevie Starr Swallows and Then Regurgitates Things in the Most Amazing Way.

As the only man with his particular ability, Stevie Starr is a global phenomenon.  Stevie can swallow random objects such as coins, sugar, billiard balls, lightbulbs, butane gas, and even live goldfish, manipulate them in his belly and return them completely dry, and in any requested order. It is a fascinating, hilarious, and unnatural talent that you must experience to believe!

Stevie has been on countless TV shows from spots on late night with Jay Leno, David Letterman, and Conan to just about every 'Got Talent' on the planet. And he has made it to the finals in every competition he has entered and has become a favorite in households worldwide as millions have seen him.  Recently, Stevie was the winner of Das SuperTalent (Germany's Got Talent) and featured as an all-star on America's Got Talent Champions and Christmas Special.

“You guys have no idea… This is my personal, absolute, most favorite of all times!” Heidi Klum

Some mild language and involves swallowing objects. No animals are harmed.

There is plenty of free parking at the municipal parking lot on Bow Street, about 150 feet away and at the City Hall parking lot about half a block away. You do not have to feed the meters after 5pm or on Sundays.