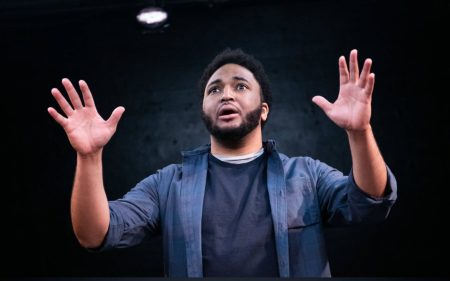 No one is safe. Nothing is sacred.

The Maturation of an Inconvenient Negro (or iNEGRO) is a solo show that’s a raw self-reflection of a young Black man coming into himself, but still not yet himself. It is a nonstop verbal onslaught laced with heightened poetic language that takes the audience on a subversive journey of disillusionment, which culminates in a scathing implication of self, community, and culture. No one is safe. Nothing is sacred.

Kareem M. Lucas is a Brooklyn born and Harlem based Actor/​Writer/​Producer/​Director. His solo pieces include The Maturation of an Inconvenient Negro (or iNEGRO), From Brooklyn With Love, RATED BLACK: An American Requiem, A Boy & His Bow, and Black Is Beautiful, But It Ain’t Always Pretty. He has performed his solo work at The Greene Space, Aaron Davis Hall at City College, The Town Hall, Fire This Time Festival, IRT Theater, The Slipper Room, Teatro Círculo, Judson Arts Wednesdays, Hi-ARTS, AFO Theater, JACK, New York Theatre Workshop, The Public Theater, among others. He is currently co-collaborating on the immersive theatrical piece The Black History Museum…According to the United States of America, as a writer/performer with the Smoke & Mirrors Collaborative as a part of their Residency at HERE Arts Center, to premiere at HERE in November 2019. He most recently was a part of The 2019 Mentor Project at The Cherry Lane Theatre, where his solo show The Maturation of an Inconvenient Negro (or iNEGRO) was mounted. He’s also a Jerome Hill Artist Fellow and a NYTW 2050 Playwriting Fellow. MFA: NYU Graduate Acting Program.

Specific seats will be assigned by presenting organization.