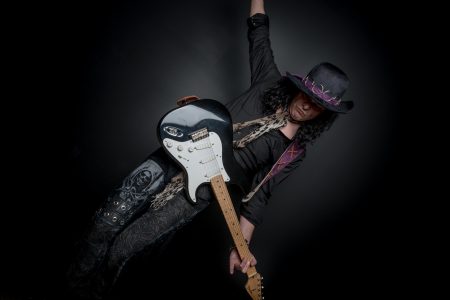 RESCHEDULED FROM MAY 2nd. All seats purchased for the MAY 2nd show will be honored on November 14th.

“A very talented guitarist … and where did that voice come from?” – B.B. KING

“Passion with a musical intelligence that places him way ahead of the other hellions igniting the Fender fretboard.”
– DOWNBEAT Magazine

“Gomes’ authentic voice and the formidable guitar chops place him in the forefront of modern blues.”
– Blues Music Magazine

“#1 Album of 2018…Hendrix on crank guitar phrasing… all the soul of Otis Redding and the swagger of Steven Tyler.”
– Blues Rock Review

Anthony Gomes, #1 Billboard Blues Artist, is a triple threat force as a guitarist, vocalist, and songwriter. This, along with his high-energy shows and dynamic stage presence, makes him one of the top draws on the Rock/Blues circuit today.

Gomes’ new record Peace, Love & Loud Guitars, named Best Blues Album of 2018 by Blues Rock Review and SoundGuardian Magazine, is the culmination of a life spent honoring Blues traditions while never losing sight of his own identity. The Toronto born guitar slinger stands his ground as a creative artist and is eager to push the Blues back into the mainstream.

“My goal is to keep the Blues fresh, exciting and even dangerous,” says Gomes. “I want to bring back the thrill longtime Bluesmen created in their day. At the same time, I think it’s very important for the music to grow and evolve.

Anthony Gomes has nothing left to prove while leaving all his passion on the table. Nonetheless, he continues striving to not only find the legendary “lost chord,” but the ultimate combinations of words, notes, and performance. Looking for an actual 21st Century guitar hero? Here he is.

This is an ALL AGES show

There is plenty of FREE parking at SEVEN municipal lots from 150 feet away to 3 blocks away. You do not have to feed the meters after 5pm or on Sundays.