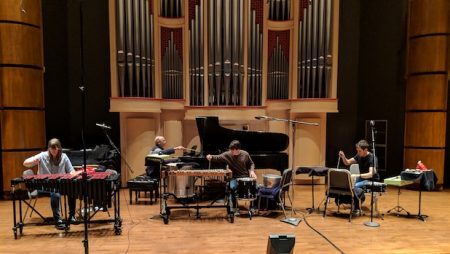 MERIDIAN is a long-running improvised music collaboration between percussionists Tim Feeney, Sarah Hennies, and Greg Stuart. The trio draws on experiences performing both improvised and composed works, and approaches percussion and improvising in a way that places the exploration of sound and interpersonal relationships rather than rhythm, gesture, or technique. Their work simultaneously explores acoustic phenomena, new possibilities in percussion technique, and a method of collective improvising that favors true spontaneity through a highly refined performance practice.

For this concert Meridian will perform a new hour-long composition by Sarah Hennies, “Reservoir 1: Preservation” along with pianist Phillip Bush. The work is the first in a trilogy of three pieces based on the relationship between the human conscious and unconscious mind.

Pianist PHILLIP BUSH has established a performing career over the past three decades that is noted for its remarkable versatility and eclecticism, with a repertoire extending from the 16th century to the 21st. He is widely acknowledged as one of the most experienced American chamber music pianists of his generation and performs internationally in a wide variety of venues and contexts that include the Grand Canyon Music Festival, Newport Music Festival, Bridgehampton Chamber Music Festival, Music at Blair Atholl, and many others. Mr. Bush has also performed worldwide for 20 years with both the Philip Glass Ensemble and Steve Reich & Musicians, and has worked in close contact with many of the most significant American composers of our time. Since 2012, Bush has been a member of the piano and chamber music faculty at the University of South Carolina.