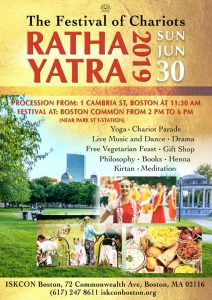 Join us in homecoming party of Lord Jagganath, Baldev and Mother Subhdra.

Every year in the summer, one of the world’s largest and oldest festivals happens in India – the Ratha Yatra. A Sanskrit phrase, “Ratha Yatra” literally translates into English as “chariot procession.” As such, three richly decorated chariots, resembling temple structures, are pulled through the streets of the small coastal town of Puri in Eastern India.

Boston chapter of the International Society of Krishna Consciousness (ISKCON) located on 72 Commonwealth Avenue, Boston, MA had been celebrating this festival for three decades now. On Sunday, June 30th a large chariot carrying the deities will make its way down Boylston Street, starting from Massachusetts Avenue and culminating at the Boston Common Park, where a cultural festival near Park Street T station will follow. The mood created will be no different from that in Puri India. The procession will be accompanied by an assortment of thunderous instruments, chanting, and dancing by Krishna devotees from all over New England.