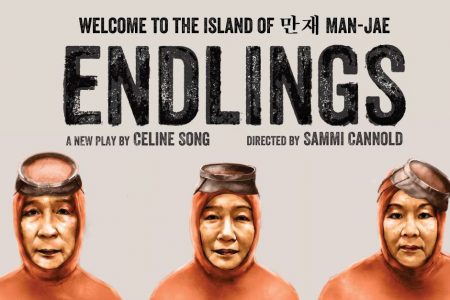 On the Korean island of Man-Jae, three elderly haenyeos – sea women – spend their dying days diving into the ocean to harvest seafood. They have no heirs to their millennia-old way of life. Across the globe on the island of Manhattan, a Korean-Canadian playwright, twice an immigrant, spends her days wrestling with the expectation that she write “authentic” stories about her identity. But what, exactly, is her identity? And how can she write about it without selling her own skin?

This daring new play by Celine Song (Amazon’s The Wheel of Time, Public Theater’s 2016/17 Emerging Writers Group) journeys beneath the waves under the direction of Sammi Cannold (Violet at A.R.T., Forbes 30 Under 30) and features Wai Ching Ho (Madame Gao from the Marvel TV universe), Emily Kuroda (Gilmore Girls), Jiehae Park (the author of peerless, recently produced at Boston’s Company One Theatre), and Jo Yang (The Affair).