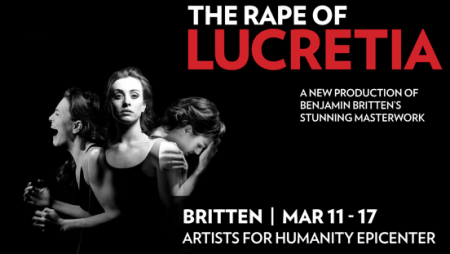 The Rape of Lucretia

Presented by Boston Lyric Opera at Artists for Humanity EpiCenter

Unflinching and haunting, The Rape of Lucretia explores the devastating impact of a single act of violence – forever altering an individual, a family, a community, and a society. Britten’s heartbreaking and lyrical 20th century chamber opera resonates as an ancient yet relevant story, illuminating compelling and complex emotions today.

Lucretia is based on the ancient Roman tale of Lucretia (retold later in a poem by William Shakespeare) who remains faithful to her soldier husband Collatinus when the wives of his comrades Tarquinius and Junius do not. While fighting off a Greek invasion outside Rome, the soldiers learn that a colleague had returned to the city the night before and discovered many of the soldiers' wives had been unfaithful. Enraged by the newsof Lucretia's honor in the face of his wife's infidelity, Tarquinius is goaded into challenging her loyalty, rushes back to Rome and enters her room while she sleeps. When met with Lucretia's refusal to submit to him, he rapes her. Collatinus returns home to comfort his wife.

Widely considered among his best compositions, Lucretia finds Britten working to reconcile the titular character's trauma with her refusal to be a victim, and her decision to take matters into her own hands. The opera was written at a time when issues of rape and its aftermath were not openly addressed. For that reason, the opera's sensitivity to Lucretia's experience, and her husband's response, is notable. In the age of the #MeToo and Time's Up movements that call out sexual aggression against women by powerful men, the disturbing narrative is both prescient and uncomfortably familiar.