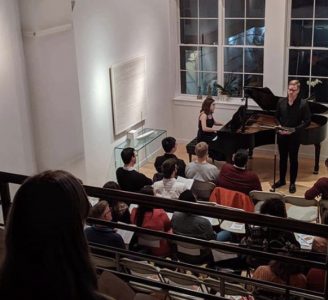 Hear music speaking truth and healing to the story of the Korean “Comfort Women” during World War II, and view a Korean film on the subject.

Our third anniversary concert offers audiences a unique two-part program of music and film dedicated to the perseverance of the human spirit amid the brutalities of war. Our focus will be on the forgotten “comfort women,” survivors and victims of sexual slavery in the so-called “comfort stations” of Asia and the Pacific before and during World War II (WWII). The first part of the program will consist of art songs from across the globe, evoking messages of peace, hope, and shared human experience during times of suffering. The second part will feature the award-winning film Spirits’ Homecoming, a 2016 South Korean period-drama about two teenage girls who were kidnapped and forced into sexual slavery during the military occupation of the country.

According to some estimates, as many as three quarters of all comfort women perished in occupied territories before and during WWII, and many survivors suffered from trauma and venereal diseases that inflicted them with infertility. Occupying soldiers often beat and tortured these women, which included branding and “scientific” experimentation. We want to take lessons from this terrible chapter of recent history, honor the survivors who are still living, and continue to foster healing, reconciliation, and education--as we strive together with hope to build a community that cries out with one voice against violence towards women.

A meet-and-greet will take place after the concert.