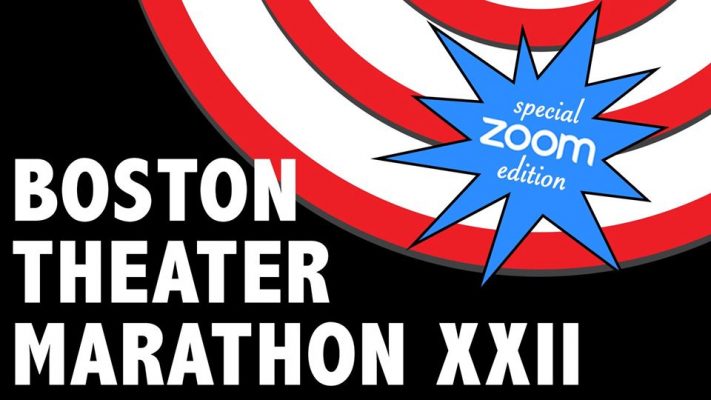 Adapting to Online Streaming with the Boston Theatre Marathon

Fear of the unknown, a perceived lack of control, and the possibility of failure — feelings shared by both astronauts traveling into space and theatre practitioners venturing into the new medium of Zoom. For Boston…

Fear of the unknown, a perceived lack of control, and the possibility of failure — feelings shared by both astronauts traveling into space and theatre practitioners venturing into the new medium of Zoom. For Boston Playwrights’ Theatre Artistic Director Kate Snodgrass, these fears were palpable as she and her team made the bold choice to take the Boston Theatre Marathon online right as our city started to feel the effects of the pandemic.

The BTM, an annual fundraiser for the Theatre Community Benevolent Fund, is a unique tradition that showcases the work of local playwrights, actors, and the wide range of theatre companies across the Greater Boston Area. In years prior, the event featured 50 plays performed by 50 different theatre companies in 10 hours. Audience members come and go throughout the day, getting a taste of stories that originated within their community.

But without the ability to gather in person, would that sense of community be lost? As Boston Playwrights’ Theatre invited companies to participate in this year’s festival, their team knew that they would face challenges in facilitating this event via live stream, which under normal circumstances is impressive, and in our current times was unparalleled.

Instead of all plays broadcasting on the same day, they chose to host one ten-minute-play daily at noon, avoiding production challenges and Zoom fatigue. From April 2 to May 17, audience members booted up their computers and tuned in for a brief moment of art, and the chance to interact directly with the artistic teams on each piece. When performing in person, audiences are kept at a distance from the stage, and with each play running back to back, there was no formal chance to discuss their reactions to the work. On Zoom, however, the Q&A feature allows viewers to send their thoughts and ask about the choices that they saw made on screen. Playwrights, actors, directors, and the BPT team all had a chance to be appreciated as viewers shared their thoughts and interacted with the piece. “They asked pertinent questions about rehearsals, about the difficulties in using the Zoom medium, about the playwrights’ writing of the play, and even about the various backgrounds used behind the actors,” Snodgrass said.

What’s more, those involved and those at home both noticed the unexpected benefits of the new medium. “I found that the Zoom edition allowed us to see the actors’ faces and eyes close up, and this was a boon to all the plays.” In particular, some plays were an excellent fit for the screen — Random Access Memory by Erin Lerch, sponsored by Flat Earth Theatre Company, was set inside a spaceship and featured one character who was a computer. The use of background images on Zoom set the futuristic scene, and the side-by-side panels evoked the barriers to communication between the human and non-human characters. Other plays used background music, sound effects, and the ability to pop on and off-screen by turning on and off one’s camera for theatricality. After watching them all, Snodgrass said, “All the plays were successful in their own ways — I was never bored.”

These creative choices are a testament to the passionate and resourceful artists that make up Boston’s vibrant theatre community. By exploring alternative mediums, artists and audiences have found new ways to connect beyond the traditional expectations of a Sunday matinee, or post-show conversation. Snodgrass said, “It was wonderful to know that so many people tuned in every day at their lunch break for an ‘art’ break.” Here’s hoping that “art breaks” become part of the new normal!

With other companies starting to take readings, performances, and conversations online, the Boston theatre community continues to enrich our city and will emerge from quarantine with new skills and new stories to tell.