The Magical Journey of a Coloratura 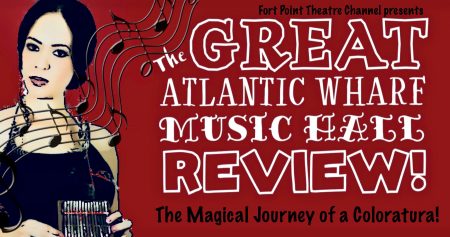 Join us for a spectacular musical journey featuring opera, cabaret, and world music!

Trained at the Conservatorio de Música de Puerto Rico and now based in Boston, singer/actress Karish Karish performs songs from opera and Broadway, dazzling us with the trills, leaps, and playfully virtuosic sounds of coloratura vocal work. Accompanied by Asia Meirovich on keyboard, Fabio Pirozzolo on percussion, and Williams Zara-Uma on flute, the reknowned musicians of The Magical Journey of a Coloratura will thrill you with music, story, and interactive singing!

Trained at the Conservatorio de Música de Puerto Rico and now based in Boston, singer/actress Karish Karish performs songs from opera and Broadway, dazzling us with the trills, leaps, and playfully virtuosic sounds of coloratura vocal work. Accompanied by Asia Meirovich on keyboard, Fabio Pirozzolo on percussion, and Williams Zara-Uma on flute, the reknowned musicians of The Magical Journey of a Coloratura will thrill you with music, story, and interactive singing!

Karish Karish (vocals and guitar) is Soprano Coloratura Ligera with an extended vocal range from F#4 – Bb6 and the versatility to perform in 10 languages and 17 genres. Karishma’s training includes the Conservatorio de Música de Puerto Rico, coaches from the New York Metropolitan Opera, the Interamerican University with a specialization in Jazz Music, and The Bellas Artes School of Acting. She has performed with the Puerto Rico Symphony Orchestra, Bella Artes Earth Day Multi Cultural Concerts, and The 7th International Culture Fest, and is the voice of the “AQUA” International circus, the most successful long-running showcase in Puerto Rico and the Dominican Republic. Locally she has performed at We Create, Boston GreenFest, The Celebrity Series “Concert for One” and as a World music singer and composer. She recorded for percussionist Paoli Mejias’ album “Transcend” and has shared the stage with Grammy Award winning artist Mamadou Diop, multi-Instrumentalist Enrique Cardenas, tenor Antonio Barasorda, soprano Hilda Ramos, and singer/composer/actress Nydia Caro. She is the winner of the F.A.M.A grants from The Operetta y Zarzuela and the Jovenes Amigos Foundation at the P.R. Metropolitan Opera Council auditions. She is also an actress, model, news reporter, and voice teacher.

Asia Meirovich(keyboard) is a multi-genre pianist, vocalist, composer, singer/songwriter and educator. Equally comfortable in the concert hall, rock club and jazz cafe, Asia creates and performs music without boundaries. Asia has released 4 singer/songwriter albums with her concert compositions and arrangements featured by various ensembles in the United States. Asia is the 2015 Steinberg composition award winner and 2017 Paulus award finalist for Choral music. Asia holds a B.M in Contemporary Writing and Production from Berklee College of Music and M.M in Composition from UMass Amherst. Asia currently teaches in Lasell University, Roxbury Community College, and the Solomon Schechter School of Greater Boston, plays piano for Koleinu community chorus and the Boston Ballet school, and is a freelance performer and composer. www.asiamei.com

Fabio Pirozzolo (percussion) is an Italian drummer, multi-percussionist and singer currently based in Boston, Massachusetts. Originally from Terracina, Italy, he started his career as a folk percussionist, playing Italian frame drums tamburello and tammorra, in one of the most famous folk groups in his area, and travelling throughout Europe, playing concerts and giving lectures on regional Italian frame drum techniques. A summa cum laude Berklee College of Music graduate, Mr. Pirozzolo is a highly in-demand drummer, percussionist, and singer. His extensive performing experience includes drumming for internationally recognized performers such as Herb Reed and The Platters, Mario Frangoulis, George Perris, Jon Butcher, and Petroloukas Halkias, among others. Mr. Pirozzolo has taught master classes at Berklee College of Music, Harvard University, and Tufts University. He has worked at Emerson College and Boston Conservatory at Berklee as an accompanist for dance classes. Mr. Pirozzolo is a co-founder of many world music and modern jazz ensembles such as the Southern Italian group Newpoli, the global music ensemble Grand Fatilla, the indo-fusion group Sawaari, the modern Turkish music ensemble Çešni Trio, and the eclectic piano percussion group Duo Coniferous. fabiopirozzolo.com.

The performances if free but reservations are recommended - please make your reservations on EventBrite here: