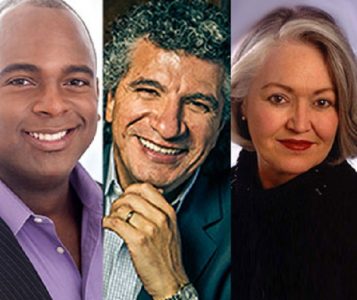 ShopTalks are weekly conversations among conductors, composers, and performers that contextualize and enrich your concert experiences. Through these candid, informal discussions, artists share their passion for the arts, their struggles and successes, and their vision for the future of classical music.

ShopTalks are weekly conversations among conductors, composers, and performers that contextualize and enrich your concert experiences. Through these candid, informal discussions, artists share their passion for the arts, their struggles and successes, and their vision for the future of classical music.

JULY 11
Ryan Speedo Green
Ryan Speedo Green is an American bass-baritone who performs for major opera companies around the world and whose journey from a tough upbringing in Virginia to the stage of the Metropolitan Opera is chronicled in Sing for Your Life: A Story of Race, Music, and Family by Daniel Bergner. He has been a member of the Ensemble of the Wiener Staatsoper since September 2014.

JULY 18
Wendall K. Harrington
Award-winning “Queen of Projections” Wendall K. Harrington is considered the nation’s leading designer and has created notable works for Broadway, Off Broadway, opera, ballet, and live concerts including The Who’s Tommy. She was design director and editor-at-large for Esquire Magazine, and in addition to a busy design career, leads the MFA program in Projection Design at the Yale School of Drama.

Dr. Harvey Young is Dean of the College of Fine Arts at Boston University, the award-winning author of seven books, and a commentator on popular culture for a variety of media outlets. He is president of the Association for Theatre in Higher Education and has served as Trustee/Board Member of the African American Arts Alliance of Chicago, American Society for Theatre Research, Northlight Theatre, and Yale Club of Chicago.

AUGUST 1
Avner Dorman & Asher Fisch
Avner Dorman, composer and conductor, is an alumni of the Tanglewood Music Center. His Double Concerto for Violin and Cello receives its U.S. premiere with soloists Pinchas Zukerman and Amanda Forsyth in the Shed on August 3. Dorman is music director of CityMusic Cleveland Chamber Orchestra and Associate Professor of Music Theory and Composition at the Sunderman Conservatory of Music at Gettysburg College.

A renowned conductor in both the operatic and symphonic worlds, Asher Fisch is celebrated for his interpretative command of core German and Italian repertoire of the Romantic and post-Romantic era. He conducts a wide variety of repertoire from Gluck to contemporary works by living composers. Since 2014, he has been the Principal Conductor and Artistic Advisor of the West Australian Symphony Orchestra. His former posts include Principal Guest Conductor of the Seattle Opera (2007-2013), Music Director of the New Israeli Opera (1998-2008), and Music Director of the Wiener Volksoper (1995-2000).

AUGUST 8
Erika Fox, Hilda Paredes, Chaya Czernowin & Zoë Martlew
Award-winning composer Erika Fox was born in Vienna of Hungarian/Romanian parents and emigrated to England as a war refugee. Her highly distinctive musical style is a result of a childhood suffused with music of Eastern European origin and many of her works show a natural affinity for theatre and stage. Since the 1970s, her music has been regularly performed at festivals, the South Bank, Wigmore Hall, and has been broadcast in the UK and internationally.

Firmly established as one of the leading Mexican composers of her generation, Hilda Paredes has made her home in London since 1979, and her music is now performed widely around the world. She has been commissioned by soloists, ensembles, and orchestras around the world and is a frequent guest lecturer and composition teacher at notable universities around the world.

Chaya Czernowin’s compositions have been performed throughout the world, by some of the best orchestras and performers of new music. She was professor of music at UCSD, and the first woman to be appointed composition professor at the University of Music and Performing Arts in Vienna, Austria (2006–2009), and at Harvard University, where she is the Walter Bigelow Rosen Professor of Music.

Cellist, composer, performer, educator, media commentator, the increasingly un-categorisable Zoë Martlew performs and records around the world as soloist and with some of the world’s most renowned contemporary music ensembles, improvisation, film, electronica, multi-media, pop and rock artists, dance, and theatre companies.

AUGUST 15
Margo Garrett & Thomas Martin
Margo Garett, an award-winning collaborative pianist and vocal coach, has premiered more than 35 new works and has an extensive discography. Formerly co-director of the Collaborative Piano Department at the New England Conservatory and faculty member at The Juilliard School, she is currently a faculty member at the Tanglewood Music Center and Music Academy of the West.

Thomas Martin holds the Stanton W. and Elisabeth K. Davis chair as Associate Principal and E-flat Clarinet, Boston Symphony Orchestra and Principal Clarinet, Boston Pops Orchestra. He has premiered a number of works, including a new clarinet sonata written for him by Sir André Previn, and has appeared as a soloist with the Boston Symphony Orchestra and Boston Pops.

Former all-American college football player and now leading opera bass, Morris Robinson performs to great acclaim in opera houses all around the world. He was the first African-American artist to sign with a major classical record label and the 2015/16 artist-in-residence for the Atlanta Symphony Orchestra, and is currently an artistic advisor for the Cincinnati Opera. 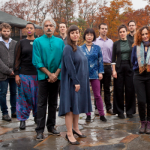 Osvaldo Golijov’s Falling Out of Time