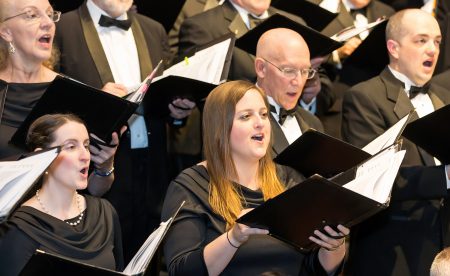 Pilgrim Festival Chorus celebrates its 20-year milestone of celebrating the world’s great choral music with two performances of Wolfgang Amadeus Mozart’s Requiem, one of the best-known choral pieces ever composed, and a setting of England’s Poet Laureate John Dryden’s poem, A Song for St. Cecilia’s Day, by Massachusetts composer Clifton J. Noble. The work, which celebrates the important role music plays in our lives, was commissioned by the Assabet Valley Mastersingers in 1998 as a companion piece to their performance of the Requiem.

“None of us knew that founding this chorus would lead to two decades of incredible choral music making,” shares Richter. “The collaboration that Elizabeth and I have enjoyed has exceeded any expectation that we imagined early on, and we’re only 20 years into this! I can’t wait for all the experiences and performances that touch the lives of so many singers and audiences that is yet to come!”

PFC’s inaugural performance at Scituate Center for Performing Arts features a debut collaboration with Scituate High School’s (SHS) Select Choir, under the direction of four-decade educator William B. Richter, who serves both ensembles. The Select Choir, an auditioned ensemble of nearly 60 high school singers, is currently immersed in rehearsing the masterwork, aspiring to foster the students’ lifelong appreciation of classical and choral music. This in-depth study, part of their school curriculum this semester, will enhance the students’ understanding of the work. The opportunity for the choir is unparalleled – singing with a large, intergenerational choral group, performing alongside adult chorus members, voice teachers, professional instrumental musicians and music educators.

“I knew my Select Choir was becoming attached to the Requiem when during rehearsal one student leaned over to another and whispered, ‘What’s your favorite movement?’” said Richter. “They have embraced this challenge and greatly look forward to performing with this adult chorus and orchestra.”

Tackling this Mozart masterwork is a landmark achievement for Pilgrim Festival Chorus, as well as an extraordinary learning opportunity for all its collective singers, orchestra members and audiences, in anticipation of reaching new fans through the Scituate expansion. The resulting Scituate performance features an assembled ensemble of more than 140 singers, further inspiring PFC’s creative and administrative leadership to achieve greater outreach in the broad South Shore community. The collaboration is supported in part by a grant from Scituate Cultural Council, in addition to funds contributed by several regional Massachusetts Cultural Council chapters.

Programming the Mozart to mark this important anniversary demonstrates Pilgrim Festival Chorus’s level of musical maturity. “It can take a long time for a group to be ready to perform a complex work like the Requiem,” says Reilly. “For the last twenty years, we’ve intentionally programmed increasingly complex repertoire that has helped our singers grow to the point where they can perform great works, both old and new.”

Three accomplished Scituate High School instrumental students join the ranks of the orchestra, offering them the opportunity to play with seasoned professionals. The orchestra also features two basset horn players that add to the flavor of authenticity in the concert. The basset horn, popular in the 18th century, was a favorite instrument of Mozart’s. Retired Scituate music educator and professional clarinetist Jennifer Gilman is embracing the opportunity to play the instrument in this orchestra in order to perform alongside Diane Heffner, a basset horn expert with several professional regional orchestras.

Pilgrim Festival Chorus is an auditioned choral group with 80 active members representing all skill levels, dedicated to the performance of choral music in many genres. Cultivating a passion for classical and choral music in audiences is central to its mission. The ensemble typically performs major concerts in the winter and spring each season. Pilgrim Festival Singers, a PFC offshoot ensemble, performs an annual summer concert series of lighter music, and occasionally sings at local community events.

Tickets to the Mozart Requiem are $20 for adults, $18 for senior citizens and $15 for students over 14. Children age 14 and under are admitted for free. Scituate Public School students up to age 14 are admitted for free by reservation, and special discounted tickets are available for Scituate families available only by online advance purchase, supporting PFC’s mission to increase access to the professional performances of classical and contemporary masterworks. Tickets sold at the door do not qualify for discounts. All tickets are available at pilgrimfestivalchorus.org and from PFC members. To reserve tickets by phone, please call Gail at (781) 826-8416. Limited tickets will be available at the door, as venue capacity allows.