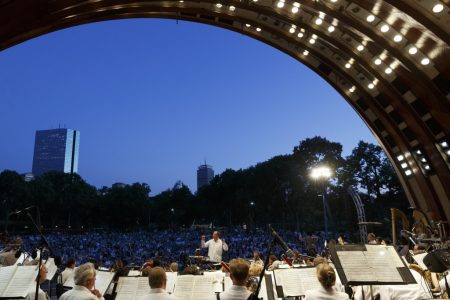 Jerome Kern’s iconic 1927 musical Show Boat has both a storied past and a controversial history. Unlike most Broadway musicals of its time, Show Boat put black and white performers side-by-side. Bringing black and

Jerome Kern’s iconic 1927 musical Show Boat has both a storied past and a controversial history. Unlike most Broadway musicals of its time, Show Boat put black and white performers side-by-side. Bringing black and white onto the same stage revealed the mixed-race roots of American popular music and Show Boat stimulated creative artists and performers to renegotiate the color line as expressed in the American musical.

But the musical and its various movie adaptations were not without controversy. Black characters were sometimes portrayed as little more than comic caricatures, and there was a tradition of casting many of the African American roles with white actors in blackface. The original lyrics and dialogue freely use language that is considered unacceptable today. But noted performers such as Paul Robeson made changes to the text—sometimes subtle but significant—which have now become part of the performing tradition.

With Show Boat and the Robeson repertoire—especially the spirituals—as a starting point, the panel will consider a period of history that begins before the Civil War and continues up until the present day. In a wide-ranging discussion, panelists will explore questions of identity, race, and cultural appropriation, sharing personal experiences of this music and related repertoire.

Alvy Powell, bass-baritone; American bass-baritone opera singer and a former member of the U.S. Army Chorus. He is known for his performances at presidential events and for performing the role of Porgy in the George Gershwin opera Porgy and Bess; Powell appeared at Carnegie Hall in 2008, singing the part of Joe in Show Boat.

Ashleigh Gordon, violist and Artistic and Executive Director of Castle
of Our Skins.

African American spirituals—revered today as essential anthems of the American experience—sing of oppression while glorifying freedom. Boston Landmarks Orchestra performs a selection of songs and spirituals by African American composers. We Need to Talk by Fred Onovwerosuoke shines light on race relations through the prism of music and poetry. The songs will be followed by a concert suite of excerpts and narration from Jerome Kern’s 1927 musical Show Boat. The musical introduced racial themes in forward-looking ways on the Broadway stage. Today it remains a beloved classic of American musical theater, while provoking both admiration and controversy.

The program features the One City Choir, a large symphonic choir comprising committed and passionate singers from all of Boston’s 23 neighborhoods and surrounding communities. The choir takes its name from the words of Boston civic leader Hubie Jones, who has advocated that “Boston can be one city through arts and culture.”

The concert is the culmination of a series of discussions and outreach events focusing on the history of race relations on the Broadway stage, and the role that African American music has played in shaping American culture.

An ASL interpreter will be present at the performance on July 31.