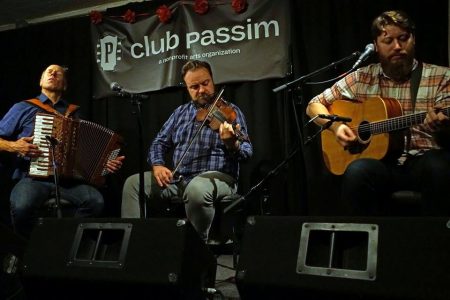 The acclaimed Celtic music duo of fiddler Ryan McKasson and guitarist/vocalist Eric McDonald performs with legendary Vermont accordionist Jeremiah McLane on Wednesday, May 8. The 8 p.m. concert will take place at Club Passim, 47 Palmer St., Cambridge. Tickets $20. The concert is part of a May tour that also takes the trio to Ottawa, Montreal, and Vermont. For information call 617-492-7679 or visit https://www.passim.org/live-music/events/mckasson-mcdonald-mclane/.

The acclaimed Celtic music duo of fiddler Ryan McKasson and guitarist/vocalist Eric McDonald performs with legendary Vermont accordionist Jeremiah McLane on Wednesday, May 8. The 8 p.m. concert will take place at Club Passim, 47 Palmer St., Cambridge. Tickets $20. The concert is part of a May tour that also takes the trio to Ottawa, Montreal, and Vermont. For information call 617-492-7679 or visit https://www.passim.org/live-music/events/mckasson-mcdonald-mclane/.

McKasson & McDonald are masters of tradition who purposefully explore the dark corners floating on its edges, combining their individual artistry to create an alluring complexity, full of spontaneous musicality. Pulling from parallel strands of influence, they create a swirling level of intensity and an air of mystery. Their compelling sound transcends boundaries to appeal to music lovers of all stripes. Devon Leger of Hearth Music says, “This duo really shows how two masterful musicians listen and play off each other.” Their live shows are full of organic banter and good humor to go along with the music. Despite both living active musical lives thousands of miles apart these two musicians have committed to working together to forge a new musical path. Legendary Vermont accordionist McLane has joined the duo for many live shows and as a guest artist on their acclaimed 2017 recording, Harbor.

Ryan McKasson is a performer, composer, collaborator, and teacher. In 1996 he was the youngest person to win the National Scottish Fiddle Championship. In 1997 he was awarded a Merit Scholarship for Viola Performance from the University of Southern California where he studied with Donald McInnes. Ryan has also been a member of the baroque/Celtic/fusion combo Ensemble Galilei. With them he co-wrote and co-produced First Person: Seeing America, a collaboration with the Metropolitan Museum of Art. He played on three recordings with the ensemble, and has also recorded with Hanneke Cassel, Alasdair Fraser, and Natalie Haas. Ryan has taught at fiddle camps around the US and New Zealand including Boston Harbor Scottish Fiddling School, Southern Hemisphere International School of Scottish Fiddle, Valley of the Moon Scottish Fiddling School, Festival of American Fiddle Tunes, Rocky Mountain Fiddle Camp, and Swannanoa Gathering.

Eric McDonald has been a professional performer and instructor of traditional and acoustic music for more than a decade. The early part of his career was spent cutting his teeth as a mandolinist in the rich local folk and roots music scene in Boston. Eric attended Berklee College of Music where he studied with John McGann. He began playing for contra dances, a form of New England folk dance derived from English, Scottish, Irish and Acadian traditions. Eric’s quick ear and tasteful approach drew the interest of many and he found himself in demand as a DADGAD guitar accompanist, finding a particular niche in the Scottish and Cape Breton styles. In 2014 Eric relocated to Portland, Maine. He maintains an active touring schedule, records, and teaches. He has performed or recorded with Celtic supergroup The Outside Track, the Dave Rowe Trio, Katie McNally, and Andrea Beaton and Wendy MacIsaac. In addition to his duo with Ryan, Eric is a member of the Scottish power trio Cantrip. He enjoys researching and performing traditional ballads, many of which are recorded on his recent solo album Rove.

Jeremiah McLane was raised in a family with deep ties to both its Scottish heritage and its New Hampshire roots, which included traditional music and dance. After early training in classical piano, Jeremiah spent his teen years playing blues and jazz. Following undergraduate studies with jazz legend Gary Peacock, he studied Indonesian gamelan, West African drumming, and the music of minimalist composers Steve Reich and Philip Glass. In his mid-20s he began to immerse himself in the world of traditional Celtic and French music, studying accordion with Jimmy Keene and Frederic Paris. He spent several decades traveling in Europe, doing field research that laid the groundwork for a Master’s degree he later received from the New England Conservatory. In the early 1990s Jeremiah formed The Clayfoot Strutters and Nightingale. Both bands had strong traditional New England roots and a deep and lasting impact on the traditional dance scene in New England. In 2003 he formed Le Bon Vent, a sextet specializing in Breton and French music, and as an outgrowth of this ensemble, he has formed several duos with individual members including James Falzone, Ruthie Dornfed, and Cristi Catt. Since the early 1990s, Jeremiah has recorded over a dozen CDs with Nightingale, the Clayfoot Strutters, Bob & the Troubadors, Le Bon Vent, and others. His second solo recording Smile When You’re Ready was praised by National Public Radio, and his fifth release, Hummingbird, received the French music magazine Trad Mag’s Bravo award, as did his CD Goodnight Marc Chagall with Le Bon Vent. In 2005 he started the Floating Bridge Music School, devoted to teaching traditional music from the British Isles, Northern Europe, and North America.