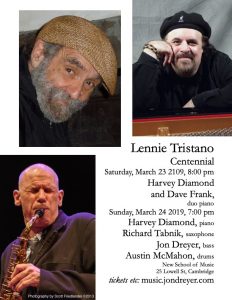 At the New School of Music, 25 Lowell St, Cambridge MA. Walk from Harvard Square, take the #71 or #73 bus, or park free in the lot behind the

At the New School of Music, 25 Lowell St, Cambridge MA. Walk from Harvard Square, take the #71 or #73 bus, or park free in the lot behind the school.

The legendary jazz pianist Harvey Diamond has graced the Boston area for decades with his music which is at once both deeply intricate and deeply emotional to even the most casual listener. Over the years he has performed across the U.S. and in Europe. among Lennie Tristano’s last students in the 1970’s, and has done concert appearances with NEA Jazz Masters Sheila Jordan, Dave Liebman, and Art Farmer, and also with Charles Neville, Herb Pomeroy, Harvie S, Jay Clayton, Joe Hunt, Don Alias, Jason Palmer, Cameron Brown, Marc Johnson, Marcus McLaurine, and many others. He has released his second CD as a leader, Fair Weather, with Cameron Brown. This follows is first CD, The Harvey Diamond Trio. Cameron Brown says of Harvey, Harvey Diamond is a unique and brilliant musician: a pianist’s pianist with a remarkable touch, unimpeachable technique and enormous dynamic range. A creative and unpredictable improvisor, Harvey’s roots go back to Lennie Tristano and Bill Evans, spiced with just a touch of Cecil Taylor. He draws the audience into his world and holds it spellbound.

Dave Frank is one of the busiest solo jazz pianists and music educators on the scene today. He is the author of the best-selling Hal Leonard book and video series, Joy of Improv and Breakthrough to Improv, was an Associate Professor of piano at Berklee College of Music in Boston from 1987-2004, and was a co-founder of the New York School of Jazz (1983-86). Since 1994, Dave has been traveling worldwide, and to date has presented solo concerts and master classes in Spain, England, Holland, Belgium, Brazil, South Africa, Switzerland, Argentina, Nicaragua, Peru, Costa Rica, France, and throughout the US and Canada. He has been a featured performer and clinician at major jazz festivals worldwide including the 2012 Jazzheads Jazz Festival, the 2010 Jazz Alive Festival, the 2002 North Sea Jazz Festival, the 2001 and 2003 Montreux Jazz Festivals, and the 1999 Winnipeg Jazz Festival. Dave Frank has been the subject of feature articles in the Boston Globe, Keyboard Magazine, and The Chronicle of Higher Learning. He can be regularly seen on the BET Jazz Network and was recently the featured guest on the NPR radio show Jazz Inspired with Judy Carmichael. To listen to the interview on the Jazz Inspired website click here (mirror). Dave has four critically acclaimed solo piano CD’s released on the Jazzheads label: Portrait of New York, Turning it Loose!, Ballads and Burners, and Power of the Piano. All are available for purchase or download at www.jazzheads.com. Dave’s teachers include the legendary Lennie Tristano, Charlie Banacos and John Larosa.

Saxophonist Richard Tabnik studied with the jazz alto saxophonist Lee Konitz from 1970 to 1972. During the years from 1975 through 1979, he lived in Buffalo, N.Y. and played lead alto sax in Frank Foster’s Big Band at University at Buffalo, The State University of New York. He has written for and performed in many capacities in Houston, Texas, Atlanta, Georgia, and Providence, Rhode Island. He studied and performed with Connie Crothers from 1980 until her death in 2016, including her quartet CCQt, featuring Connie Crothers on piano, Roger Mancuso on drums, and Sean Smith on bass. His recordings include Duo Dimension with Connie Crothers, Solo Journey, In the Moment with Carol Tristano and Cameron Brown, and Life at the Core with Andy Fite, Calvin Hill, and Roger Mancuso.

Drummer Austin McMahon performs regularly with Jerry Bergonzi’s Quartet and has recently performed and/or recorded with Sean Jones, George Garzone, Joe Lovano, Lionel Loueke, Ben Monder, Lage Lund, Kate McGarry, Noah Preminger, Jason Palmer and Grace Kelly. He has appeared as an opening act for Grammy award-winners Dianne Reeves and Esperanza Spalding. McMahon is the winner of the 9th annual Independent Music Awards for Jazz Song Category and Nominee for Best Jazz Album in the 11th annual IMA’s. His debut CD Many Muses was selected as a CDBaby Editor’s pick and described as “subtle, reverential to tradition, and thoroughly new.” He was recently featured on NPR JazzSet with Dee Dee Bridgewater, WLRN Miami (NPR station) and live on WGBH radio, Boston, MA. Austin is also the co-founder, producer and recording artist for the burgeoning record label Fractamodi and has recorded on over forty commercially released albums in the past several years.