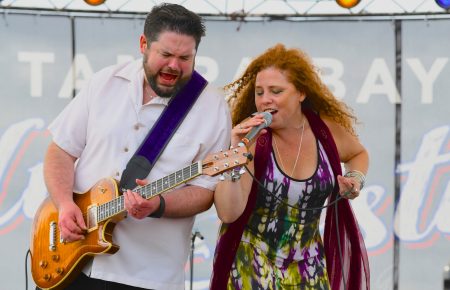 The year 2016 was one of large-scale and unexpected change for Tampa Bay area blues and soul vocalist Lauren Mitchell. During a tumultuous time in both her personal and professional life, she was given the opportunity to rise from the challenges she was facing and make the album of her career with producer Tony Braunagel. Mitchell took the leap of faith because she is a true student of the blues, a music that's all about finding a way to transform difficult experiences into
View more

The year 2016 was one of large-scale and unexpected change for Tampa Bay area blues and soul vocalist Lauren Mitchell. During a tumultuous time in both her personal and professional life, she was given the opportunity to rise from the challenges she was facing and make the album of her career with producer Tony Braunagel. Mitchell took the leap of faith because she is a true student of the blues, a music that’s all about finding a way to transform difficult experiences into something cathartic.

The timing was perfect. She had an album to record. That album, “Desire,” is her most fully realized musical statement to date. Through a bold mix of her own original material, songs she hand-picked from the repertoires of her friends, and select covers of tunes first performed by Etta James, Bettye Lavette, Diana Ross, Aretha Franklin and Betty Davis, Mitchell tells a blues story that’s been a lifetime in the making. It’s a stylistically varied set of 13 songs expertly recorded by drummer and Grammy-winning producer Tony Braunagel, whose work with Bonnie Raitt, Taj Mahal and Robert Cray have made him one of today’s most in-demand blues industry professionals. Recorded during a ten-day trip to Los Angeles, Braunagel brought out the best in Mitchell, highlighting every nuance in her powerful vocals and helping her craft an emotionally resonant album that’s destined to go down as one of the year’s highlights. Besides Braunagel, the band features guitarists Johnny Lee Schell and Josh Sklair, keyboardist Jim Pugh, bassist Reggie McBride, sax player Joe Sublett, trumpet player Darrell Leonard, and percussionist Lenny Castro.

“The blues is a song of victory,” Mitchell says. “It’s a way to say, ‘I’m over it,’ and now I’m turning it into this beautiful thing that can help someone else heal. That’s what this record is for me.”

With over 25 years of touring and recording under his belt, Boston-based blues guitarist Monster Mike Welch is considered a seasoned veteran of the international blues scene despite his relatively young age. Given the nickname “Monster Mike” by actor/Ghostbuster Dan Aykroyd at the tender age of 13, Welch has since carved out a niche as a highly accomplished and in-demand guitarist.

To date, Welch has released six albums under his own name, and in 2001, he joined the ranks of one of New England’s most beloved blues institutions, Sugar Ray and the Bluetones, where he stayed until 2017, recording five albums and racking up multiple Blues Music Award nominations for the band in that time.

Kit Holliday has been singing professionally for over half her life. She’s sung and played in styles from rock to musical theatre to blues, jazz, and gospel, as lead or backup for other professionals and chick singas.

In 2005, Kit was voted Outstanding Female Vocalist in the 2005 Blues Audience Readers Poll. During her stint with The Matthew Stubbs Band, she and the band won the 2003 Boston Blues Challenge. In 2004, Kit and the band travelled to Memphis to bring home third place in the International Blues Challenge.

Kit spent much of 2006 and 2007 playing and touring with Ricky “King” Russell, and other great area musicians. Between 2007-2015, she also lent her singing and music direction talents to funk and disco favorites Booty Vortex. In 2008, Kit began fronting her own ensemble, and spent 2009 and 2010 “putting the band back together” before shelving the project to work with many other groups in the Boston area. Lately she keeps her schedule marginally less busy and focuses on supporting touring acts as a backup singer with The Lady Parts (also featuring Lydia “The Lovely Singer” Harrell).

Her newest blues project, The Ominous Vultures (with Monster Mike Welch and Jesse Williams), aka The Restless Wonders, aka Kit Holliday & Her Boyfriends’ Band, launched in 2017.

Kit also brought that stuff you forgot to bring to the gig.