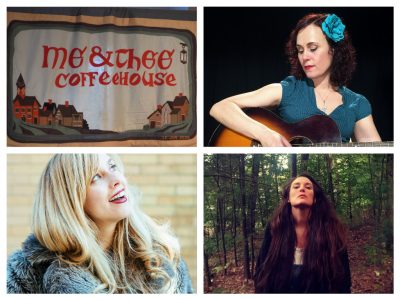 Danielle Miraglia is like a musical butterfly who’s been granted unlimited creative metamorphoses. Even her musical chrysalis stage was a surprise emergence. Unlike so many Boston artists who attended one of the city’s many music schools, Miraglia went to Emerson College, graduating with a creative writing degree. Though she owned an acoustic guitar she seldom played anywhere but at home, she hadn’t given any thought to making a career as a singer-songwriter until one fateful night at

Danielle Miraglia is like a musical butterfly who’s been granted unlimited creative metamorphoses. Even her musical chrysalis stage was a surprise emergence. Unlike so many Boston artists who attended one of the city’s many music schools, Miraglia went to Emerson College, graduating with a creative writing degree. Though she owned an acoustic guitar she seldom played anywhere but at home, she hadn’t given any thought to making a career as a singer-songwriter until one fateful night at the famous, now-defunct Kendall Cafe. She went to an open mic at the Kendall just to watch and absorb. It didn’t take long for it to register with her: I thought, That’s what I want to do: Get on stage to do my storytelling that way. Voila!

Her evolution as a songwriter and performer since then has been remarkable. She quickly won great acclaim and a faithful national and regional following after beginning as a folk-blues picker, and its a persona she still skillfully embraces in solo shows, but to hear her musical storytelling with such a fine backing band as the satirically named Glory Junkies (Laurence Scudder, viola; Erik White, guitar; Chris Anzalone, drums; and Jim Larkin, bass) is an entirely different dimension. That soul of a creative writer thrives in a vast range of musical styles. Danielle now rocks an electric guitar with equal aplomb, and all with a rocking and soulful energy that pays homage to top influences such as Janis Joplin, Prince and the Stones. No matter how Danielle Miraglia’s stories unfold on stage, they are a joy to hear.

Kerri Powers makes it consistently clear that she’s adept at expressing sentiments that ring and resonate with common appeal. with the assertive mine the river, she explores the idea of finding a motherlode, using it as a metaphor for striking it rich in romance and maintaining a sense of gratitude, even when faith seems especially fleeting.  Other songs make their points with equal measures of subtlety and finesse. the sassy shuffle and bluesy sway of album opener peeping tom ostensibly retells the story of Lady Godiva, a princess who rode naked through a village to spite her politically powerful husband — under the watchful gaze of an obsessed voyeur — makes a statement about sexual harassment and insidious intimidation. “I was initially a little reluctant to put this song out there with all the stories that are making headlines these days,” Powers admits, “yet with so many courageous victims relating their experiences, I’m actually thankful for the chance to share the song. hopefully it will help bring about awareness, albeit in a slightly abstract and whimsical way.”  Much like countess Godiva, Powers has taken an unconventional approach to her music career and the hurdles that inevitably come with it. during an artistic youth indulging in music, painting and writing. She composed her first songs at the age of nine. Her creative instincts seemed to come naturally, given that there was a certain talent embedded in her genes. Bing Crosby was a distant relative on her father’s side, while her mother’s relatives claimed a kinship to Herman Melville. Her paternal grandmother even maintained a position playing piano as accompaniment for silent movies, as was the custom back in the day.  In her teens Powers began performing in local coffeehouses throughout New England. but when she fell in love, got married and had a child, she put her pursuits aside. Later, after raising her son and overcoming the hardship of a difficult divorce she rediscovered her passion and returned to making music.

Erin Harpe has been called one of the most dynamic, talented and exciting roots-rocking blues women on the scene by Living Blues Magazine. Winner of the 2018 Boston Blues Challenge, and nominated for 2018 Blues Artist of the Year by the Boston Music Awards, Erin is having an exciting year. Brought up on delta and piedmont blues, which she learned from her dad, Erin recently returned from the International Blues Challenge in Memphis, where she made it to the Semi-Finals playing solo. Just back from her second British Isles tour, Erin has a busy year ahead of her, including tour stops in Chicago, West Texas, a week teaching blues guitar workshops at Augusta Blues & Swing Week in West Virginia, as well as plenty of festivals and tour dates around the US.  Growing up in Maryland, Erin learned finger-style blues guitar from her dad, visual artist/guitarist/Stella guitar expert Neil Harpe, as well as from watching local piedmont blues luminaries such as John Cephas & Phil Wiggins, John Jackson, Eleanor Ellis, Warner Williams, and others at the famed Archie’s Barbershop in Washington, DC. Later moving to Boston, Erin put out two acoustic blues albums, Blues Roots (2002) and Delta Blues Duets (2008) an album of duets with her dad in between touring and releasing five albums with her rock band Lovewhip (with hubby/bass player Jim Countryman). Erin’s soulful vocal style and accomplished finger-picking guitar playing has earned her many fans, including guitar greats Ronnie Earl and Billy Gibbons, and she is quickly becoming recognized on the international blues scene.

$20 for general admission online at www.meandthee.org or at Arnould's Gallery or Spirit of 76 in Marblehead.  Tickets at the door at 7:30 pm. on night of the show.   $10 for students.