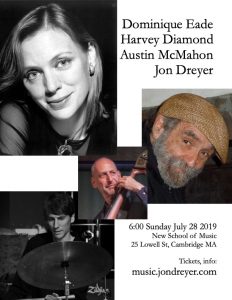 Vocalist Dominique Eade has been an active performer on the vibrant Boston and New York jazz scenes since the 80's.

Vocalist Dominique Eade has been an active performer on the vibrant Boston and New York jazz scenes since the 80’s. Early in her career she performed with Mick Goodrick, Donald Brown and Bill Pierce. In addition to her own groups, Eade also has performed contemporary classical music and was a featured soloist with Boston Musica Viva, Composers in Red Sneakers, NuClassix and jazz big bands Orange Then Blue and the Either/Orchestra. Eade released her first CD, The Ruby and the Pearl, featuring Alan Dawson and Stanley Cowell, for Accurate Records in 1990. She performed in a variety of contexts including soloist roles in two Anthony Braxton operas, duo performances with Gene Bertoncini, an adventurous trio with Ben Street and Kenny Wollesen performing weekly in the East Village, and duos with Mark Helias and Peter Leitch. She played at The Village Gate, The Five Spot, Birdland, Visiones, and Cornelia Street Café with groups including Larry Goldings, John Medeski, Fred Hersch, Kevin Hays, James Genus, Gregory Hutchinson, and Tom Rainey. She recorded her second CD, My Resistance is Low (Accurate), featuring frequent collaborator Bruce Barth, George Mraz, and Lewis Nash. She recorded two critically acclaimed CDs for RCA Victor, When the Wind Was Cool featuring Benny Golson, Fred Hersch, James Genus, Matt Wilson, and many others, and The Long Way Home with Dave Holland and Victor Lewis, which highlighted Eade’s arranging and songwriting. Eade and pianist Jed Wilson released a CD of duets, Open, in 2006. In the last decade she has reemerged in New York, first with Ran Blake, then in duos and quartets with Jed Wilson, Ben Street, Matt Wilson, and in duo with guitarist Brad Shepik, all receiving critical recognition. She has been on the faculty of New England Conservatory since 1984 and also teaches privately in New York. Her students have included Luciana Souza, Kate McGarry, Sara Lazarus, Lisa Thorson, Julie Hardy, Patrice Williamson, Kris Adams, David Devoe, Aoife O’Donovan, Roberta Gambarini, and many others. She has also traveled in the United States and Europe as a clinician and performer.

Drummer Austin McMahon performs regularly with Jerry Bergonzi’s Quartet and has recently performed and/or recorded with Sean Jones, George Garzone, Joe Lovano, Lionel Loueke, Ben Monder, Lage Lund, Kate McGarry, Noah Preminger, Jason Palmer and Grace Kelly. He has appeared as an opening act for Grammy award-winners Dianne Reeves and Esperanza Spalding. McMahon is the winner of the 9th annual Independent Music Awards for Jazz Song Category and Nominee for Best Jazz Album in the 11th annual IMA’s. His debut CD Many Muses was selected as a CDBaby Editor’s pick and described as “subtle, reverential to tradition, and thoroughly new.” He was recently featured on NPR JazzSet with Dee Dee Bridgewater, WLRN Miami (NPR station) and live on WGBH radio, Boston, MA. Austin is also the co-founder, producer and recording artist for the burgeoning record label Fractamodi and has recorded on over forty commercially released albums in the past several years.