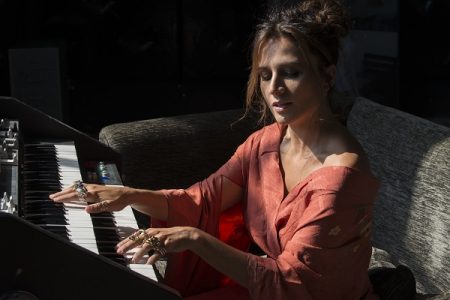 “The best jazz singer of her generation” – Tony Bennett

Born in Rome, as soon as she turned 18 Chiara Civello left for the USA to attend Berklee College of Music in Boston and soon became the first Italian artist to record for Verve Records. Her first album was produced by Russ Titelman, who discovered her in NYC.

A great result of the Boston-NY days are the 10 songs of her recording debut LAST QUARTER MOON (Verve 2005), seven of which written by her and three in collaboration with other artists, including the great ballad Trouble, written with Burt

Born in Rome, as soon as she turned 18 Chiara Civello left for the USA to attend Berklee College of Music in Boston and soon became the first Italian artist to record for Verve Records. Her first album was produced by Russ Titelman, who discovered her in NYC.

A great result of the Boston-NY days are the 10 songs of her recording debut LAST QUARTER MOON (Verve 2005), seven of which written by her and three in collaboration with other artists, including the great ballad Trouble, written with Burt Bacharach. Her debut granted her with a first world tour, making her hit the Japanese and Italian charts. Billboard Magazine noted that, “the beauty, charm and allure of singer/pianist/songwriter Chiara Civello’s debut…makes for an auspicious beginning and marks the first revelation of the New Year.” The International Herald Tribune declared “her combination of personality, soulfulness and sophistication…striking.”

Called “the best jazz singer of her generation” by Tony Bennett, Chiara Civello lived up to that acclaim with her second release; one that left listeners contemplating the beauty of her voice and her songs and the space between. The second album “The Space Between”, produced by Steve Addabbo and Pete Rende (Universal Jazz and Classics, 2007), showed us in an intimate-acoustic setting, another aspect of Chiara’s music. She describes the intention: ” It’s a record about the space between…the notes, the silence between the words, the space between you and I and all those spaces we have a hard time to relate to nowadays.”

The third album, 7752 (Universal Jazz and Classics 2010), marks an important new step in Chiara’s career: a geographic move to BRAZIL. After landing in Rio to visit her friend Daniel Jobim, Chiara was taken to a musical party (SARAO) where she met a lot of great Brazilian artists playing their songs and exchanging creative ideas. A guitar was going around the room and stopped at Chiara’s place. From that moment on her new phase started. Ana Carolina, one of Brazil’s biggest stars, was the main collaborator on the new album. Success immediately followed the collaboration when their first composition together, RESTA, became the soundtrack of a very well known soap-opera “Passione”, produced by the GLOBO TV. Produced by latin pop producer Andres Levin, 7752 featured a great cast of musicians like Jaques Morelenbaum on the cello and strings arrangement (Tom Jobim, Caetano Veloso, Gilberto Gil, Ruichi Sakamoto), Mark Ribot on guitar, Mauro Refosco as a percussionist (Thom Yorke, David Byrne, Red Hot Chili Peppers) and Anat Cohen on sax and clarinet.

In 2012 Chiara took part in the Sanremo Festival, the biggest Italian TV musical event, with a song written with Italian/Spanish songwriter Diana Tejera. That gave the title to her fourth studio album: AL POSTO DEL MONDO.

In 2014 with CANZONI, a very successful fifth studio album, Chiara Civello, for the first time stands out in the unedited role of “torch singer” and interprets the Italian repertoire like we never heard before. In this celebration of love songs, Chiara has gathered an extraordinary array of collaborators: the monumental Gilberto Gil, the poetic Chico Buarque, the pop diva Ana Carolina and the jazz star Esperanza Spalding all lend their artistry to this project. The lush, almost hypnotic orchestral arrangements were conceived by the legendary Eumir Deodato.

In 2017 she publishes her sixth studio album, ECLIPSE. Elegant pop, brazilian influeneces, a few surprising excerpts from Italian cinema, and subliminal electronics. All this and a lot more is Eclipse. The fundamental elements of Chiara’s music acquired a new flavor thanks to the englighted production of Marc Collin (from the french band Nouvelle Vague) who found the perfect balance between classic atmospheres and modern sound.

“I met him in Paris in the summer of 2015, when I opened for Caetano Veloso and Gilberto Gil and it was love at first sight. Afyer listening to few of the songs I had, Marc suggested a new approach which could preserve the essential elements of my music with some very special sounds. I didn’t let him say it twice: I moved to Paris, rented a place in Marais and we immerged ourselves in a magic world of electric organs form the 70s, birds and wind sounds, electronics, and we created the sound of ECLIPSE”

In 2018 Chiara has succesfully toured with brazilian star Gilberto Gil throughout Europe, as special guest of his “ReFavela 40” tour.