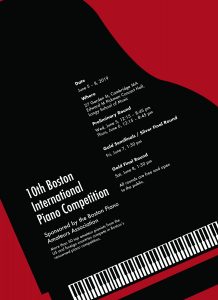 BPAA’s Boston International Piano Competition attracts highly talented adult amateur pianists age 30 and above from across the globe, passionate as performing artists, second to their main careers. Contestants are often highly successful doctors, engineers, lawyers, teachers, accountants or flight attendants, in addition to performing as technically adept and musical piano amateurs with truly magnificent skill. Many have multiple accolades on their competition resume, having performed in recital and with orchestras locally and internationally. The 2019 roster boasts 56 competitors summoning from Japan, China, Russia, Germany, France, Ireland, the United Kingdom, the Netherlands, Canada and from across the United States, some local to Boston.

“It is gratifying to witness how much our competition has grown, and how highly regarded it has become, attracting wonderful pianists from all over the world, inspiring and motivating all of us to improve our level of performance to the highest standard possible,” shares Director Finley. “It is a joy to contribute to enriching the cultural life of Boston and to interest fans new and old with classical music and exceptional piano performance.”

The Boston International Piano Competition is divided into gold and silver “streams”. The silver stream features two rounds, preliminary and final, with 15-minutes maximum of repertoire from each competitor in each round. The jury listens to silver stream contestants and selects several to progress to the final round. The jury then listens to the finalists and selects first, second and third prize winners.

Following the competition, an awards ceremony is held on Saturday where prize winners, including the grand prize winner, are announced. Special prizes for the best performances of romantic, classical, baroque, modern piano pieces are awarded, as well as an audience prize, selected by audience ballot.

Boston Piano Amateurs Association, founded in 2001, is a 501(c)(3) non-profit organization dedicated to the vision of promoting Boston as a center for non-professional pianistic excellence, and enriching its cultural life; interesting and educating the public in classical music and piano playing; providing performance opportunities, masterclasses and workshops for adult non-professional pianists of all levels, to help improve their playing; and offering biennial piano competitions for outstanding non-professionals.

All rounds of the Boston International Piano Competition are open to the public, admission is free. To learn more, visit Boston Piano Amateurs Association at bostonpianoamateurs.org, follow Boston Amateaurs Association on Facebook, or contact the Competition Director at 508-393-6740. For more information about the event venue at Longy School of Music of Bard College’s Edward M. Pickman Hall, visit longy.edu.