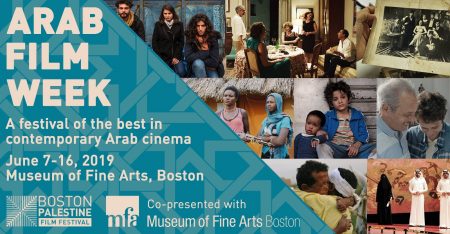 For the fourth year, the Boston Palestine Film Festival and MFA Film are proud to present a survey of the very best contemporary films from the Arab region of North Africa and the Middle East.

This year’s festival opens with the Lebanese stunner Capernaum, winner of the Grand Jury Prize at the 2018 Cannes Film Festival, and includes the touching drama Yomeddine, Egypt’s submission for Best Foreign Language Film at the 91st Academy Awards. For newcomers to Arab cinema or devoted fans, this festival is not to be missed.

This year’s festival opens with the Lebanese stunner Capernaum, winner of the Grand Jury Prize at the 2018 Cannes Film Festival, and includes the touching drama Yomeddine, Egypt’s submission for Best Foreign Language Film at the 91st Academy Awards. For newcomers to Arab cinema or devoted fans, this festival is not to be missed.

Known as the “Frank Sinatra of Tunisia,” Hedi Jouini is the most popular musical star in Tunisian history. His songs inspire revolutionaries and reactionaries alike, striking at the heart of the post-colonial social and political upheaval in Tunisia and its continuing search for identity in the wake of the Arab Spring. But why did the late Jouini keep his fame hidden from his family? Determined to learn more about the enigmatic grandfather whose fame and talent she only accidentally discovered after his death, filmmaker Claire Belhassine embarked on a quest to find out. The film builds a profound portrait of the godfather of Tunisian music-father to a nation, yet not to his family.
___________________________________________________
The Poetess (Saudi Arabia)
Stefanie Brockhaus and Andreas Wolff
2017 | Documentary | 89 min
Sunday June 9, 2019 3:00p

Riadh is about to retire from his work as a forklift operator at the port of Tunis. The life he shares with his wife Nazli revolves around their only son Sami, who is preparing for his high school exams. The boy’s repeated migraine attacks are a cause of much worry to his parents. Just when he finally seems to be getting better, Sami suddenly disappears. A vague Facebook message explains that he has joined friends in Syria. Riadh sets out in search of his son.

Visitors to the MFA have three self-parking options: the Huntington Lot, the Fenway Lot, and the Museum Road Garage, all of which have entrances on Museum Road. The Huntington lot offers closer parking to the Huntington Avenue Entrance and the Fenway parking lot is more accessible to the State Street Corporation Fenway Entrance.

All parking facilities have handicap spaces.

Please take your parking ticket with you; all parking facilities are automated. Payment for parking may be made in the garage lobby, or by credit or debit card at the exit lanes of the lots. Scan your membership card to receive the discounted rate.